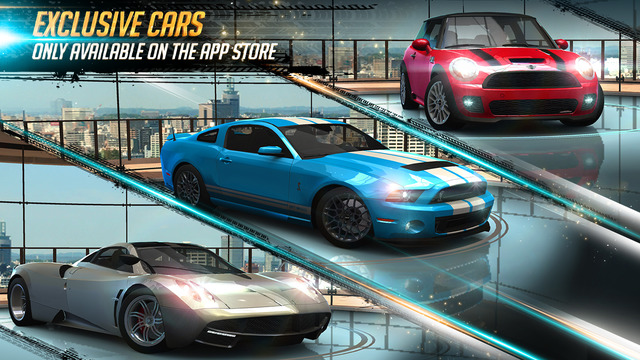 A new racing game is now available on the App Store, a new game for iOS users but not for everybody as it’s been available for some time on other formats.

Nitro Nation Online is a racing game focused on multiplayer and online play, as players will be racing against others in a variety of races of different length. The game includes quite a few cars that players will be able to tune and customize to win as many races as possible. All the around 40 cars of the game are fully licensed, including cars from Chevrolet, Ford, Dodge, BMW, Volkswagen, Honda, Nissan, Mazda and Mercedes-Benz. A couple of cars not found in the previous release of the game are also available in the iOS version, such as the Mini Coupé John Cooper Works, the Ford Shelby GT500, and the Pagani Huayra.

Nitro Nation Online is now available for download on the App Store as a free to play game. Thankfully there is no fuel system so it’s possible to play the game without any sort of limitation. No pay to win IAPs are also included so you better start working on your driving skills if you want to be successful in Nitro Nation Online.