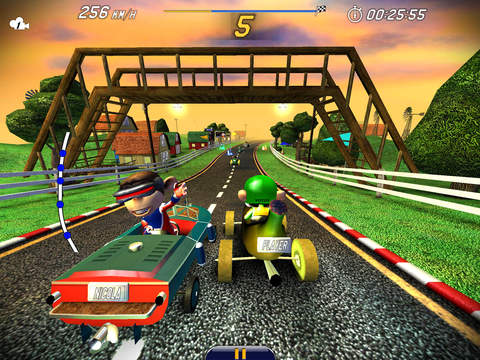 Monkey Racing, a new racing game developed by Crescent Moon Games, is going to be released later today on the App Store.

The racing game, which is already available on the New Zealand App Store, plays not that different from the Mario Kart games and other similar titles, with players controlling vehicles driven by monkeys on a variety of tracks. And just as in the Mario Kart series, it will be possible to use a variety of weapons to attack opponents and win races.

Monkey Racing is definitely not going to lack content. The game will include different challenges, extra updates and many more unlockables so it’s going to take a while to check out everything the game has to offer.

Monkey Racing seems to be the perfect type of game to play on the go, thanks to a simple gameplay experience that can keep players engaged for some time. Unfortunately some early reports reveal that the game has some issues with the controls and other mechanics so you may want to wait for more opinions on the game before purchasing it.

Monkey Racing will be released later today on the App Store for $2.99.