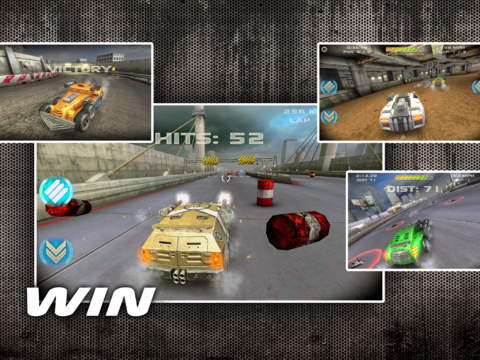 There are plenty of racing games on the App Store that offer either an arcade or more realistic experience but very few that twist the gameplay experience with unusual features, like racing games that allow gamer to literally take on their opponents with weapons.

A new racing game with battle features is going to be released later today on the App Store. Battle Riders has been released on the New Zealand App Store earliet today, meaning that it will hit all the other regions at around midnight.

In Battle Riders, players will be able control some heavy armed cars that will be able to attack other cars, making the gameplay experience quite exciting. The controls are also pretty simple to understand: you will be able to steer by tilting the device and shoot with buttons placed on the side of the screen. There’s also a brakes button, but it probably won’t be used as much as the weapons button.

Battle Riders may not be the most unique gameplay experience on the App Store but it sure seems fun enough, and that’s all that matters in the end. Those who love the Mario Kart series will surely find the game quite fun.

Battle Riders will be released later today on the App Store for the price of $1.99.