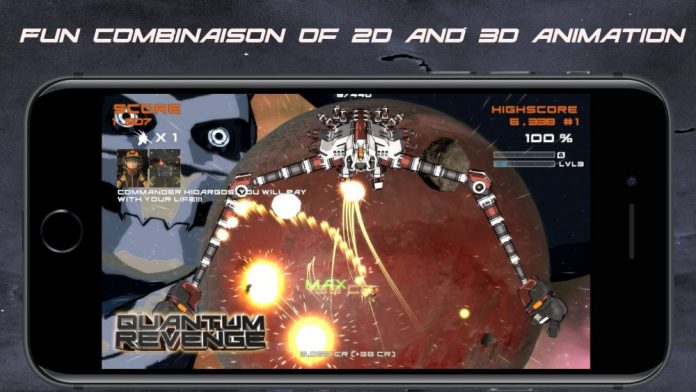 The arcade twin-stick shooter genre can be a bit staid. Yes, games like Geometry Wars have raised interstellar blasting to an art form, but shooting colored shapes is far less rewarding than shooting actual baddies.

That’s where Quantum Revenge comes in. This game from Montreal-based team Realtech VR is the perfect answer to all those sterile shooters. It has more actual baddies than you can shake a stick at.

But you won’t be shaking a stick at them. You’ll be blasting them to smithereens.

This charming anime-inspired adventure sees you controlling three elite mech pilots, Tetsuji, Katashi, and Shin, who stayed behind to defend the Earth after the rest of the human race struck out to colonize new solar systems in the year 70 (Galactic Calendar, obv).

The Earth inevitably comes under attack from Rokuseya’s army, leaving you to repel wave after wave of cosmic baddies in an endless dance of exploding molten death interspersed with robot boss battles, 2D animated cutaways, and authentically cheesy dialogue.

You start the game with a choice of six different robotic armors and characters, with their own unique abilities and special attacks. As you reduce the invaders to smoke and ashes you earn the ability to upgrade your shield, add a drone, and more.

Quantum Revenge is looking like it’ll be a challenging game, with five missions boasting two bosses each and an epic final level. Thankfully, dealing with awkward touchscreen controls won’t be part of the challenge. Not only can you customize the control layout, but you can use a Bluetooth controller or DualShock if you have one handy.

We’re excited to play Quanum Revenge, thanks in large part to its awesome anime stylings. You can download it now from the App Store [buy] or Google Play [buy] for the introductory price of $2.99.