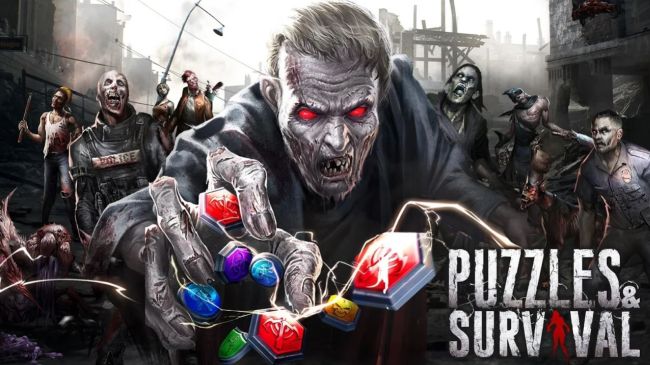 In today’s article, we are going to dive into the Puzzles & Survival game guide and share with you all of our intel about surviving the zombie apocalypse. In this game, you have a good deal of tasks to work with, and if you’re still confused as to where to begin, don’t worry – you came to the right place.

Below we are going to give you all of our Puzzles & Survival tips and tricks and teach you exactly how to progress in order to get stronger fast. So, without further ado, let’s dive right in!

Progress in the Campaign Mode

The very first time you open the game you might believe it is a simple match-three type of game – you couldn’t be more wrong! The game is so much more than that. You get to build your own base of operations, strengthen it, and do everything in your power to diminish the zombie forces.

You can find the Campaign mode on the map, next to the Arena and Tavern – it’s a helicopter. I suggest that you progress as much as you can, and when you cannot advance further, you start upgrading your base and heroes.

The main reason why I suggest progressing in the Campaign first is because of the rewards. Also, as long as you know how to match (at least) three blocks, you’ll do great in passing the Campaign stages. Otherwise, read how to do it below!

How to Progress in the Campaign Mode?

In this mode you have to match at least 3 blocks of the same color. There are a total of 5 colors (each block, enemy zombie and character on your team will have one), which can work better (or worse) against another. This is how they work:

– yellow and purple counter each other

– green counters blue, but is weak against red

– red counters green, but is weak against blue

– blue counters red, but is weak against green

You should always try to match the blocks of the color which counters the one of the enemies. That’s the fastest way you could defeat them.

Don’t Forget to Use Your Heroes’ Skills

All of your heroes will have an active skill you can use. That skill could be healing, a shield or any other team buff, or plain damage to the enemy. You will charge this skill by matching blocks of the same color as the hero (i.e. match red blocks to be able to use red hero’s skill).

I suggest that you use the skills wisely, and only when you need them. So, don’t use a heal if your team is at full health, don’t use your strongest attack if the enemy has 1% HP, and so on – you get the point. This is very important, especially as you keep on advancing through the Campaign because enemies become a lot stronger.

Target the Enemy You Want

If you want to take down a specific enemy first, you can target it by tapping on it. A red target mark will appear on the enemy, and when your heroes start casting their attack/debuff skills, they will prioritize that enemy.

Farms are going to be your number one source for resources. You can build them on the outskirts of your base, and as you keep upgrading your Headquarters, you will be able to unlock more land and expand.

I suggest that you start with 3 Farms and 3 Virology Labs, then upgrade your HQ to level 3 and unlock one more land. There you can place 2 Lumber Mills (at the beginning, until you unlock more) or 3 Bootcamps.

My choice here: I personally prefer to have them separated – the Virology Labs in one section, the Farms in another and so on. There is no particular reason for this, it’s purely for organization purposes.

I suggest that you start upgrading all of the building, from top to bottom. For each level of your HQ, you will increase the maximum level your buildings can advance to. So, make sure that before you make a new upgrade to your Headquarters, you upgrade every single building you own to max.

By doing this you will complete the game’s quests before the game even asks you about them.

When you join an active Alliance you will be able to benefit from several perks, such as construction speed ups and protection. Furthermore, you will receive a bonus of 300 Diamonds when you join your first Alliance. (you can see this offer on the bottom right side of the screen – it’s a jumping chest)

Once you join an Alliance, you will be able to relocate your base next to your mates’ on the world map. So, make sure you do so because it will offer you more protection against random enemy attacks.

After you join an Alliance, you can build the Alliance Hall. That will allow you to offer and receive help from others, speeding things up quite a lot!

When you are building or upgrading something, you should always use the help option from the Alliance before you spend any speed-ups. The Alliance help can really help you a lot, because for each player that gives you a hand, it will reduce te cooldown by a couple of minutes.

Just like you can request help, you should also help the others. In the bottom right corner of the screen (above the “More” button) you can see an icon with two people shaking hands. Tap on that and you’ll see all of your mates from the Alliance who request help. For each one you help you’ll receive Alliance Coins.

If you’re a trivia fan and you have some knowledge about Puzzles & Survival, you can complete in-game trivia questions (in the Quiz) and receive various rewards, from resources to speed-ups and more.

The Quiz can be found in the left side of the screen, in the Radio building (next to the EVA and Fighter Camp).

As a f2p player, you will rely a lot on the free recruits and other free ways to gather characters. For instance, you can recruit heroes for free every day in the Tavern. These recruits are available every 5 minutes or so, and they will give you a hero between 2 and 3 stars (Basic Recruit).

Also, if you gather Recruit Coins for a particular recruit, I suggest that you don’t use them right away. Instead, you should save them up for when you’ve got 9 of them. With 9 Recruit Coins, you can recruit 10 times. I know that it’s going to be difficult to try and not to spend them, but do your best to do so because it’s for the best.

After you have recruited some powerful heroes, you can go ahead and use the Antiserum to upgrade them. I’d suggest not to invest too much in your weakest heroes, because eventually you will unlock some good 5 star heroes. So, try to upgrade the weaker ones only as much as it’s necessary to pass the levels.

Save the remaining Antiserum for when you unlock the stronger heroes, then feed them all of it! For example, a 4-star hero has a way bigger impact at level 10 than a 3 star hero at level 20.

There are a lot of missions you can focus on in the game. Most often you will find them in the Quest tab, the second icon on the bottom bar. There, you can see and check out the following:

– Main Quests: these quests will help you progress in the game. You can also find them in the bottom left corner of the screen – the icon looks like a notepad with a checklist. You can do them and claim the rewards in both of these windows.

– Hunting: Hunting mainly refers to smaller tasks which you can complete in the World Map. You could do these when you’re waiting for specific updates to complete, or when you want to work towards gathering specific resources.

– Growth / Other: The Growth and Other quests are similar to Achievements. They will ask for fairly simple tasks, but which take time. You don’t need to focus specifically on them, because they will come naturally as you keep working on upgrading your base. You could earn rewards such as Diamonds, EXP, Resources, Speed-ups, and more.

– Daily Quests: When you have upgraded your HQ to level 5, you’ll unlock the Daily Quests. Make sure you complete them every day, because they will give you lots of useful rewards that will help you grow.

Last but not least, make sure to redeem codes in time!

The game features a gift code redemption option which is great for helping out players with upgrades, resources and various other loot. Make sure you redeem your free gift codes before they expire!

These would be all of our Puzzles & Survival tips and tricks that we have for you right now! Do you know some other useful game tips or have some suggestions for the other players? Or maybe you want to share your Alliance ID to promote it? So, feel free to share it down in the comments below!