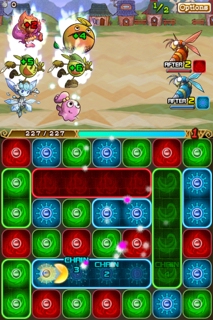 Pac-Man is definitely one of the most recognizable video games character ever released. Even people that usual don’t game know about him and what he usually does: eat some strange pills, wander through some dark labyrinth and so on.

For this reason it’s not surprising to know that Bandai Namco has put the character in a lot of different games that tried to stand out from the competition by using a really popular character. It hasn’t always worked, to be surem but this lead to the creation of some really interesting games.

That’s definitely the case with Pac-Man Monsters, a match three puzzle – role playing game hybrid that resembles Puzzle & Dragons quite a bit. Pac-Man Monsters, however, comes with enough differences that set it apart from other similar games, like the ghosts that will randomly appear when your matching colors and more. The included classic Pac-Man mechanics make Pac-Man Monsters a really unusual game.

Pac-Man Monsters is now available for download on the App Store. The game is a free to play game so make sure to give it a try if you enjoy this type of game or if you’re simply a Pac-Man fan.