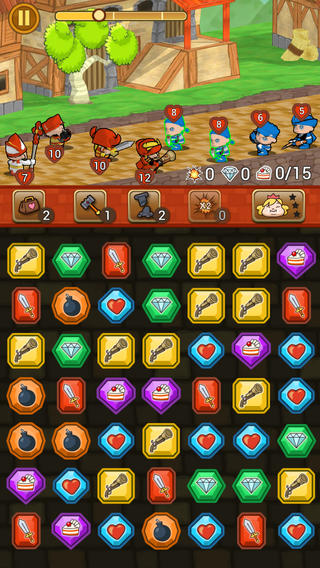 The Fat Princess franchise, one of the exclusive Sony consoles series, has finally landed for good on the App Store with a free to play match 3 puzzle game.

Fat Princess: Piece of Cake isn’t exactly a completely new release, as the game has been soft-launched a few months ago in select regions. Now the game is finally available all over the world, allowing players to enjoy a solid puzzle / role playing game experience.

As in several other similar titles, Fat Princess: Piece of Cake will involve a lot of symbol matching, with each different symbol representing a different action. By matching symbols properly, it will be possible to restore health, reduce damage and attack enemies in order to keep the titular Fat Princess safe.

Even though the game doesn’t feature anything really revolutionary, there’s another reason to play it especially if you own a PlayStation 3 console. Reaching level 15 in Fat Princess: Piece of Cake will give players a free voucher for Fat Princess which can be used to download the game for free on PSN.

Fat Princess: Piece of Cake is now available for free on the App Store. The game is a solid experience so make sure to check it out if you love cartoony games as well as match 3 puzzle / role playing games hybrids.