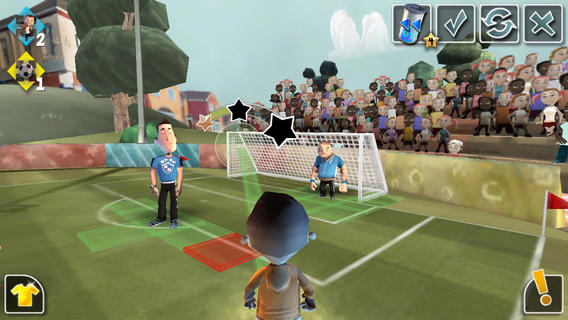 As I have already said before, the iOS gaming world is really an intriguing one. Together with more “regular” games, we also get some unique and creative games that probably wouldn’t have been created if the mobile market wasn’t as strong as it is today.

Among the many unique games created for iOS devices is a recently released interesting combination between a puzzle and a soccer game called Soccer Moves.

The game’s premise is actually pretty simple. Gamers control one or more attackers as they have to score. Unlike other soccer games, you will have limited amount of moves and this is where the puzzle game elements come in, since you will have to think hard about the moves you’re going to do.

Aside from scoring, you will also have to complete some extra objectives which will award you with some extra points that can be used to buy power ups that can make your life easier during the game.

The game also has a plot, which doesn’t really go in depth about anything but serves as a decent backdrop for each of the levels included in the title.

Soccer Moves is now available for download from the App Store. The game is a free to play titles that comes with small in app purchases that are not required to fully enjoy the game.