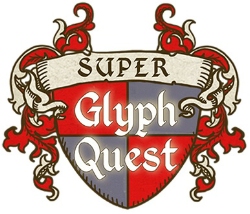 Fans of the puzzle/ role playing games hybrid game Glyph Quest will be happy to know that a sequel to the game is currently in development.

Super Glyph Quest will be, just like the original game, a role playing game filled with match-3 puzzles. The gameplay experience will obviously be much bigger than before, with new glyphs, Primal and Metal, that will allow gamers to cast a lot of new spells when combined with the original Glyphs, Fire, Earth, Water, Air , Light and Dark. The new game will apparently feature over 70 magic spells.

Super Glyph Quest is also going to feature more quests, monsters, crafting and more. Character customization will also be in, making the game feel more like a role playing game than its predecessor.

Super Glyph Quest has yet to receive a release date at the moment. The team has only confirmed that the game is indeed in development. More news will surely be coming in soon so stay tuned for all the latest updates. If you really cannot bear the wait, you can check out the Super Glyph Quest launch trailer right below and see for yourself the brand new features that will be included in this really unique game.