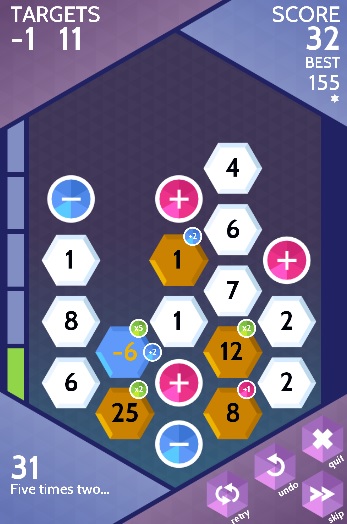 A new math based puzzle will be released on the App Store later in September, a game where you will have really quick and knowledgeable about maths in order to succeed.

Sumico, developed by Ludomotion, may seemquite simple in the beginning but things will become hard soon enough, with players having to reach the stage’s goal in a limited amount in time and more. Things obviously become even worse when the formulas become more complicated, forcing gamers to be really quick and accurate.

Despite becoming increasingly complex as more stages are completed, Sumico also gives freedom to gamers, as there are multiple strategies that can be employed to clear each stage. This is definitely a good thing that also removes some potential tedium and frustration from the game.

Sumico will be released on the App Store next month. The game will be available as a free to play game, with ads, with players having the possibility of removing ads by purchasing the game for $2.99. We will let you know when the game launches on the App Store as soon as more news come in on the matter, so stay tuned for all the latest updates.