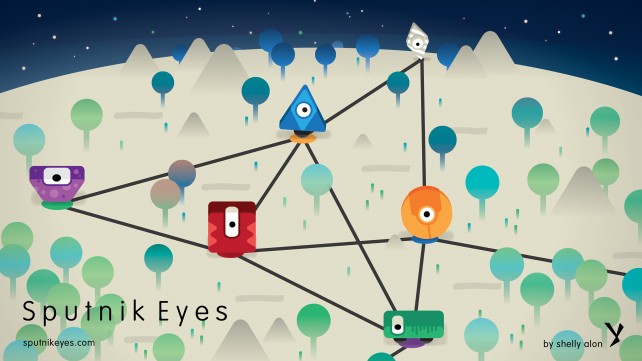 Around one week ago we have reported that a really interesting puzzle game called Sputnik Eyes was going to be released this week on the App Store. Now we can confirm that the puzzle game developed by Shelly Alon is indeed available for download right now in all regions.

Sputnik Eyes has been developed by the same team behind the casual game Partyrs, which has been released a few months back on the App Store. The team’s new game, however, has very little in commong with their previous title.

In Sputnik Etes players have to help some strange one eyed robots find a new planet. In order to clear stages, players have to launch rockets and analyze planets andlater arrange the robots on the planets’ surface by matching the colors of both surface and robot. Each stages comes with different paths so the puzzle are always varied and never dull. Sputnik Eyes’s gameplay experience is basically a match 3 puzzle game experience featuring a couple twists that make it quite engaging so fans of puzzle games will surely appreciate the game.

Sputnik Eyes is now available on the App Store for the price of $1.99 and no IAP whatsoever. The game seems like a really nice puzzle game so make sure to check it out if you like match 3 puzzle games.