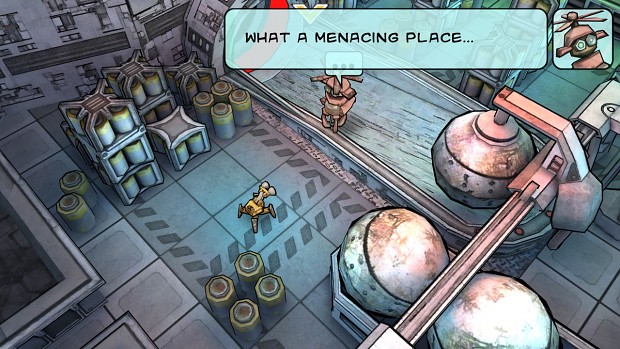 A futuristic themed puzzle/adventure game has been announced today for iOS. The game isn’t exactly an entirely new release since it’s been available for the OUYA console for some time. For most gamers, though, this is going to be an entirely new game: how many people we know have the OUYA? Very few, I’d wager.

Clarc is a puzzle adventure game which stars maintenance robot Clarc #37, who works in a nuclear missile factory on Mars. The factory hasn’t been doing too well lately, with many robots preferring to slack off rather than keep working in the factory, leaving poor Clarc alone in his work.

Things take a turn for the worse when the base is attacked by a mysterious spaceship, which also manages to disarm the whole factory. Clarc is the only one who can navigate through the base, solve some tricky and intense puzzles and rescue Clara, his beloved. Who in actuality is an atomic bomb.

Most of the games puzzles involve moving around some blocks in order to open a path, press switches to open doors and more. Things get complicated quite quickly, with several gameplay elements getting introducing in later stages. With over 100 puzzles, you can be sure you will be busy for a very long time.

Clarc will launch on iOS on a yet to be revealed release date. We will let you know precisely when it launches when more news become available on the matter.