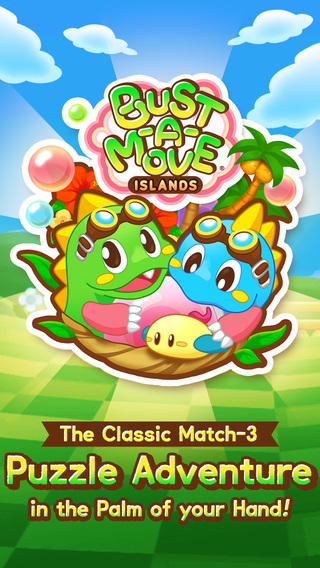 Bust-A-Move, also known as Puzzle Bobble, is one of the more popular puzzle games ever released. The whole series started as a sort of spin-off of the Puzzle Bobble series and has managed to become even more popular than the original franchise.

A new game of the series has now landed on the App Store. Bust-A-Move Islands, published by Gumi Inc., comes with all the features players expect out of a game of the series such as the two classic characters Bub and Bob, over 200 levels filled with bubbles to match and pop and more. The series’ successful formula has also been spiced up with new bubble types, ostacles and more. Weekly Tournaments will also make players come back often to the game to show the world their bubble popping skills.

For those few who have never heard of the series, Bust-A-Move is a match three puzzle game where players have to match the color of the bubbles found at the top of the field to remove them. Players are able to launch bubbles directly or make them bounce on the walls. Failing to remove bubbles from the field repeatedly will bring them closer to the bottom of the screen, making it more difficult to complete the stage.

Bust-A-Move Islands is now available for download for free on the App Store.