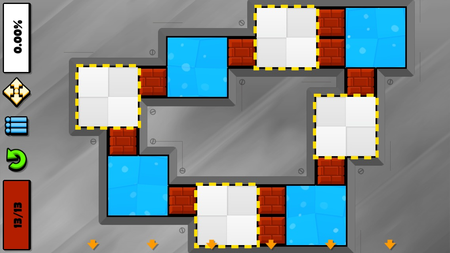 Fans of puzzle games probably remember a really interesting game called Briquid, developed by Gamious for iPad and released over a year ago on the App Store. Being only available for iPad, iPhone only owners have never had the chance to play the game. Luckily, a new version of the game that can also be played on iPhones is going to be released later today on the App Store.

Briquid Mini is going to play not too differently from the original game, with players having to fill some special zones with water. In order to move the water from one area to another, players will have to destroy and move bricks, tilt their devices to change gravity and more. What makes things more complicated is that players have a limited number of moves they can do in each stage.

Briquid Mini comes with around 100 stages. Those who have played the original game will notice that some stages have been lifted straight from the iPad version, while many others are completely new so even those who have mastered the original release have a good reason to get the new version.

Briquid Mini will be released later today on the App Store for only $0,99. The game will be available for both iPhone and iPad devices.