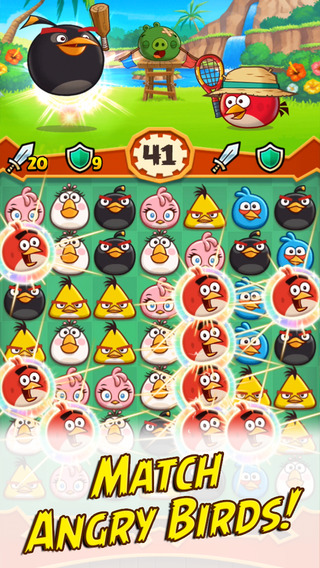 A new entry of the Angry Birds series developed by Rovio is now available for download in all regions on the App Store. The game isn’t a completely new release, though, as it has been available in the past few weeks in select countries in soft-launch mode.

The new game from Rovio is called Angry Birds Fight and it plays differently from other entries of the series. The game is a match three puzzle game where players have to match three or more symbols to increase attack and defense power and win matches against other players. The game also comes with features taken from role playing game such as the ability to level up and equip your characters with a variety of items and more.

Other players aren’t the only opponent you will face in Angry Birds Fight. The game allows players to explore a variety of islands, defeat some powerful Pigs and obtain powerful items that will be rather useful when battling other players.

Angry Birds Fight is now available for download on the App Store. If you want to learn more about the game, you can also check out our Angry Birds Fight Tips and Tricks guide to learn some useful tips that will help you at the beginning of the game.