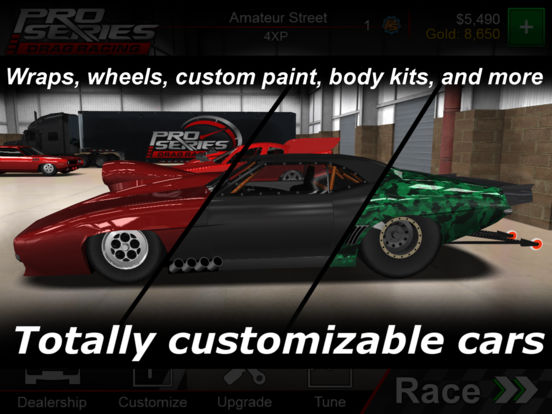 Don’t be a drag! Gear up with Pro Series Drag Racing, one of the most realistic drag racing simulators we’ve ever played! There’s more to drag racing besides well-timed shifts – you’ll need to watch your acceleration, pull off at the right time, and so forth. You’ll also need to take care of your car and make sure you buy the appropriate upgrades! We’re here some tips and tricks to start you off on your drag racing career, so let’s get started with our Pro Series Drag Racing cheats, tips and tricks strategy guide!

1. Pay attention to the upgrades!

Unlike other racing games, the upgrades featured in Pro Series Drag Racing aren’t “one size fits all”! There are various upgrades in each category and they differ in price and stat changes. You’ll need to pay attention to how your four main stats change when examining different upgrades. Some upgrades will lower percentage in one stat while improving another stat. Most of the time it’ll be weight being lowered, which is generally a good thing. If you just want to race with the best stuff, buying the part labeld “Top Part!” will usually do the trick. Keep in mind – if you want to fine tune (for experts), you’ll need to buy specific parts. Refer to tip #4 for details!

Whatever you do, don’t ever rush the pre-staging setup. After the initial pull up, make sure the pre-stage light is on before you push the gas to start the stage. From there, keep the launch button held down. It might seem like the game has stopped at first, but you need to wait about 3 seconds before the launch lights actually go. If you let go of launch too early, you’ll get a short pull up and your car will lag behind. This will almost guarantee you to lose the race, so it’s very crucial you don’t mess up the pre-stage!

Playing through nothing but the Points Event races will make you hit a wall pretty fast. No matter how well you’re doing, you will not make enough money to afford all the best upgrades, and eventually your car just won’t be powerful enough to beat opponents. You’ll need to rely on Quick Races at this point. The racers in this mode aren’t that tough, so you should be able to get by okay. You’ll earn some decent money which you can put towards new upgrades to help you in the Points Event races.

Selecting Tune and buying the drivetrain will allow you to fine tune your car. This is where things get a little in-depth! You’ll see first through sixth, ending with rear, and a bunch of bars and numbers. These correspond to your gears. The shorter the green bar is for a gear, the more speed you’ll gain before hitting the next gear. So, for example, let’s say first is mostly to the left, and your second gear is mostly to the right. You’ll start off in first gear for a while, but when you get to second gear you’ll shift quickly into third. You can adjust each bar to your liking. Remember that it’s perfectly okay to leave the drivetrain as it is and work with that.

There are more categories to fine tune aside from the drivetrain, including your launch, suspension, timing, and so forth. Each category requires a specific upgrade to tune, so if you want to get into fine tuning you should start here when it comes to buying upgrades.

That’s all for Pro Series Drag Racing. If you have any other tips or tricks to share, let us know in the comments below!