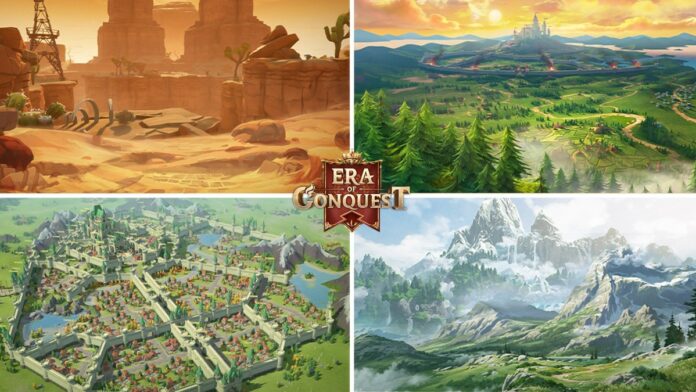 The good news is that Era of Conquest is open for pre-registrations.

The great news is that by pre-registering now you can take part in an Early Bird event from July 14th at 8am EST, getting a glimpse of the game before the rest of the world joins in.

More info on the Early Bird later. First, let’s remind ourselves why Era of Conquest is threatening to become the biggest cross-platform strategy on the planet when it launches later in 2022.

Era of Conquest is a 4x real-time strategy game that gives you the choice of ten different world civilizations, from the Romans to the British to the Chinese and so on. Then it lets you loose on a vast continent stuffed with resources, challenges, and enemies.

As well as civilizations there are individual heroes to collect, customize, organize into formations, and send into battle.

Already available in China, Era of Conquest has topped the iOS download charts and secured a number of Featured slots on the front page of the App Store. It’s not hard to see why.

For a start, this is a game for everyone, boasting cross-platform support across iOS, Android, and PC. And when it launches globally it’ll also boast global servers and 19 different languages. Wherever you are, whatever you’re playing on, you’ll be able to join the fight along with everybody else.

Fortunately, there’s plenty of space for them all. Era of Conquest’s map spans an incredible 120 km-square. That’s an area significantly bigger than Disney World, full of swinging swords, jabbing pikes, and clashing shields.

But not only that. Era of Conquest also lets you join alliances with other players, allowing you to enter defensive pacts, pool resources, and increase your odds of survival.

A second reason for Era of Conquest’s remarkable success in China is the fact that it’s got no time whatsoever for pay-to-win.

Your primary military resource is your army, and after every battle you replenish this precious resource through conscription, which happens in two ways. You can open conscription boxes, and you can wait for new troops to arrive automatically.

You earn conscription boxes in PvP battles, and there’s no way to speed up your waiting times by spending resources. This keeps everything fair. Skill is your only currency.

As if all that weren’t enough to tempt you, Era of Conquest is also an absolutely stunning strategy game, with polished 3D graphics and support for up to 6,000 units in a single battle.

Era of Conquest is such a must-play prospect that you shouldn’t wait for the full launch – not when there’s an Early Bird coming up.

Pre-registering now will give you the chance to see the game early and get an early advantage over your rivals. You’ll be able to learn the terrain, get to grips with the gameplay, and install yourself as an early ruler.

The Early Bird event is also a golden opportunity to meet other players and lay the foundations of your future alliances.

Plus Early bird data will be saved on the server – so nothing will be lost, but when the game launches you’ll receive a refund for anything you purchase during the event.

If you’re a PC or Android gamer living in one of those territories, you can pre-register for Era of Conquest on the Google Play Store or download it for Windows right now.