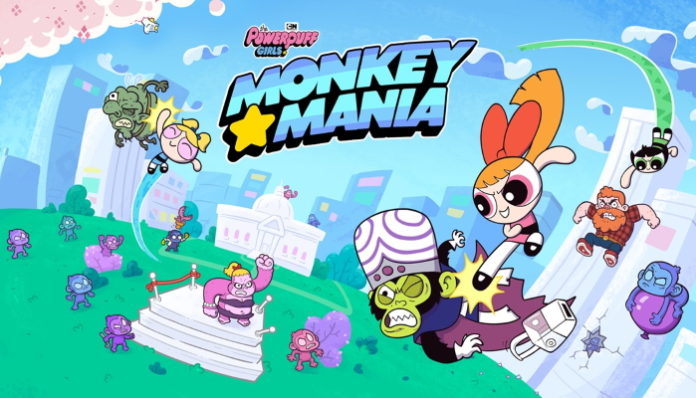 Mojo Jojo has sapped the Chemical X out of the Powerpuff Girls, and now they have lost their powers! Now, they have to rely on good old physics to save the day in Powerpuff Girls: Monkey Mania, a new physics-based launching game where you see how far you can get.

Powerpuff Girls: Monkey Mania requires a lot of grinding because you need a lot of coins to get anywhere, so expect to be doing the same distance runs over and over again to build up lots of coins.

Then, when you are upgraded, you can see how far you can get! In our Powerpuff Girls: Monkey Mania cheats, tips and tricks strategy guide to fly far, we will go over all the different ways to upgrade and boost your flight time!

Build up speed to get as far as you can!

In order to stop Mojo Jojo, you will need to reach him first! The goal of Powerpuff Girls: Monkey Mania is to keep getting further and further until you rescue the entire team and reach the evil monkey himself.

When you launch yourself, bounce off of your opponent to get a boost. As you are travelling through the air, make good use of your Power Smashes to keep your momentum going. Land on the Mojo Minions to build up power and keep moving.

You can check how much speed you have at the bottom left corner of the screen. When this number reaches zero, your run is over and you have to start over from the beginning.

Use Power Smashes to keep your speed!

When you land on a Mojo Minion, you will lose a tiny bit of speed, but not as much as hitting the ground. If you ever touch the ground, you will lose 10 speed, which can put your run in danger.

You can only perform a Power Smash if you have at least one charge in the meter on the left side of the screen. Fill the Power Smash gauge up by destroying Mojo Minions!

Upgrade the Powerpuff Girls to get farther!

The girls cannot get to Mojo Jojo without your help! After the end of every run, you will earn coins which you can spend on new upgrades for the girls. Here, we will go over all of the upgrades you can get.

The final three upgrades are hidden behind time travelling and the X shop, which are end game things. You do not have to worry about them for now.

Use Troublemakers to help you get to the goal!

The second category of upgrades are called Troublemakers. These minions will appear periodically throughout your run, and smashing into them can result in positively explosive – yet rewarding – results!

In addition to the troublemakers, there are also special minions. These guys appear much more frequently and they are an important factor in getting really far!

Allegro, the party-packed stuffed panda, can be smashed to bits every several hours. Allegro will contain a random amount of temporary power ups, coins, and more. Be sure to catch him when it is time to open him!

Every time you buy an upgrade in the shop, you will earn a red star. Earn enough red stars – as indicated in the little info panel with Allegro – and you will permanently upgrade Allegro, increasing the amount of goodies he has in him.

Make sure Duplikate is charged and ready to go!

You may have already noticed that the prices of certain upgrades can skyrocket, even as early as the second upgrade. You may be wondering how on earth will you be able to get that many coins…?

Well, Duplikate is the answer! As long as this magical glove is charged, he will add a passive multiplier to your coins at the end of a run. You can watch advertisements to boost the multiplier, and he will stay charged for 15 runs.

After those runs, he will need to be charged again, which will take about an hour or so. It is OK to play without Duplikate charged, but you will earn less coins.

And with that, you should be able to reach Mojo Jojo in no time! If you have any other tips to share, let us know in the comments below!