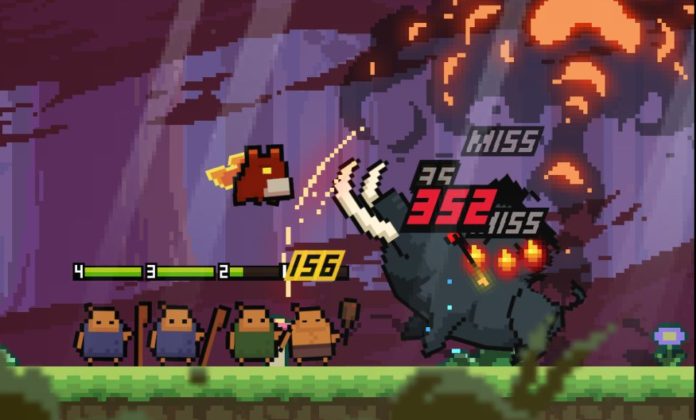 Potato Clan is yet another surprisingly interesting game that we’re going to talk about today, following the equally strange yet charming Cat Knight Saga. This seems to be the day of different game, and we’re going to make it count with some Potato Clan cheats and tips to help you win battles, unlock more characters and have a ton of fun.

With it pixelated and charming retro graphics and with a simple concept that rarely manages to actually prove a challenge, this game is full of content, things to do, items to unlock and equip and options to choose from.

It is extremely addictive especially because of its simplicity and even the sometimes atrocious translation of the game and typos (unless they really want to call the premium currency “Diomands” instead of “Diamonds”) contribute to the overall charm.

This is a relatively fast paced, extremely simple game that still manages to keep you glued to the screen for hours – and days – so let’s make the most out of them by checking out below some Potato Clan tips and tricks in our complete strategy guide!

The Goddesses are everything!
For a very long time in all types of missions, all you need to do is to activate the skills of your Goddesses in order to easily win all missions. For real! That’s it and it never gets old. Well, of course it does, but it’s better than losing your battles! 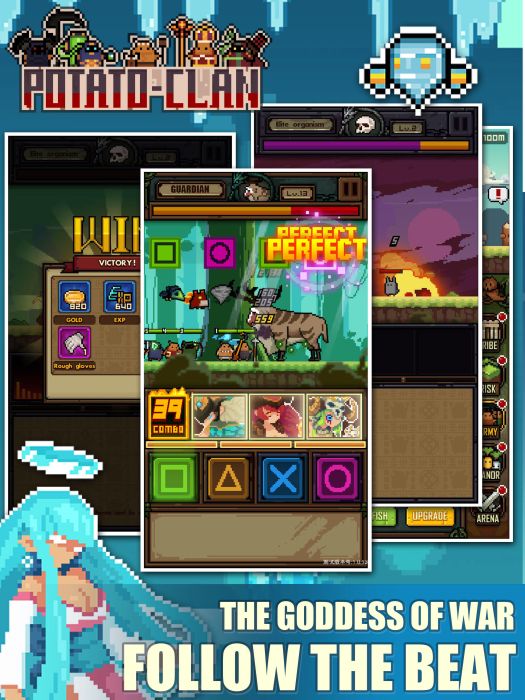 You should, for this reason, do your best to max out the number of Faith you have in the game in order to level up the Goddesses and have them deal even more damage. They are all really useful in my opinion, but it is best to focus on a single on a single one. I particularly like the stormy one, but I am sure that any of them will be just as useful in the long run.

Keep an eye on the villagers
Remember to tap the “Tribe” icon ever now and then, when in between fights and you might end up with some really pleasant surprises. Sometimes, the villagers will get some icons above their heads and this means that they have some goodies for you.

This way you will notice that there are a ton of special features in Potato Clan (as well as many which are not “unblocked”). The most useful villagers to tap on, though, are those with a shield above their head. These will generate faith, which is essential when it comes to upgrading the Godesses (and we already discussed how amazing they are!)

Farm those seeds!
You will receive all sorts of seeds and plants when completing missions in the game and you should take the time to use them. Tap the Bag button near the “Fight” one and see what’s in your inventory – you’ll be surprised with the amount of goodies stored in there, things you probably weren’t really aware of.

The seeds must be planted, though, and you can collect them after a specific period of time passes, but the goodies there are usually extremely useful and worth the waiting time. I would also spend some “Diomands” to unlock a few extra slots for those seeds.

Rank up your potatoes!
The game is really complex – or at least appears to be, offering you the chance to level up and then specialize your Potatoes (your army, in other words). 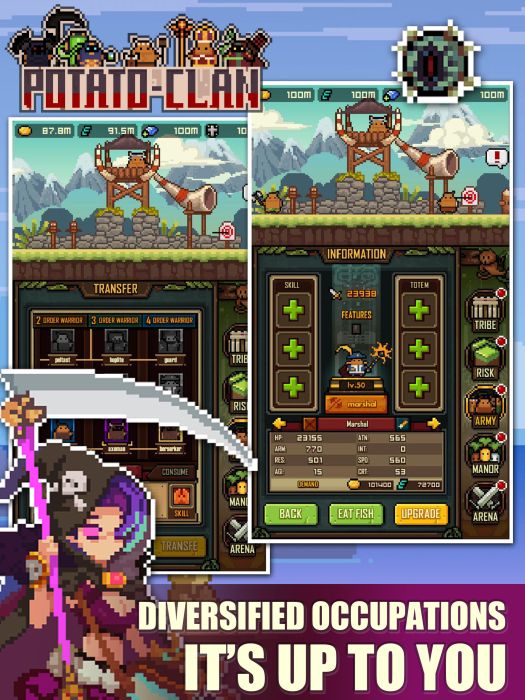 There are three main types of units in the game: Warriors, Ranged and Mages and each can be further specialized based on your preferences. You don’t really know what exactly will happen when you choose a path or the other due to the usually ambiguous description, but it usually makes enough sense to at least give you a vague idea of what’s going to happen – which is part of the game’s charm.

I personally recommend to go heavy on damage dealers and always upgrade the characters based on their special skills. Because, yes, some potatoes are better than the others – and you can find out which one is which by simply tapping the number of squares under their name. This shows you the unique abilities they have and you should rank them up based on this.

For example, a potato that has extra HP and deals more melee damage is not really the best choice to turn into a mage. Instead, he’d make for a good warrior to keep forward up the lines and act as a damage dealing tank.

However, not all potatoes have special skills (the common ones don’t) so eventually, after playing the game for a while, you will be able to truly customize your army.

The only problem that I had so far is that specialization doesn’t go too far: when I try to go for the second tier with my brave soldiers, I can’t use the “Transfer” button even though they are well over level 50 and I have all the required materials. There might be something that I am missing here, so I am still investigating.

Usually, the best team setup has at least a healer and 1-2 ranged units and 1-2 solid tanks (high health) up front.

This would be all for Potato Clan today. If you have more tips or tricks to share with fellow players, don’t hesitate to let us all know by sharing your comments below.