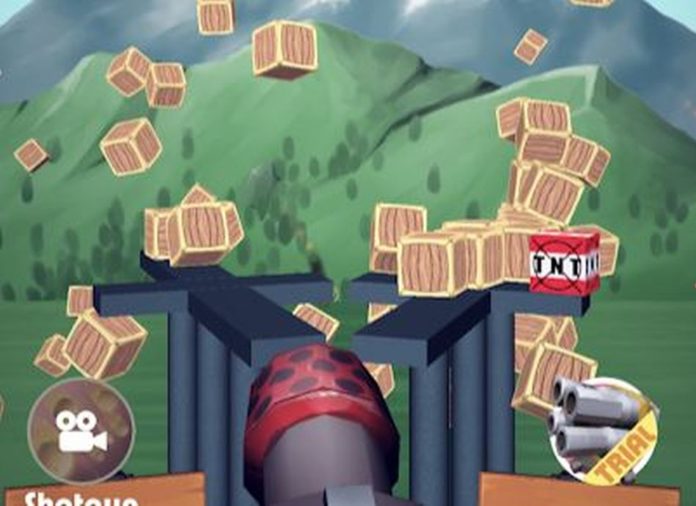 In today’s article we are going to share with you all of our Pot Shot tips and cheats to help you take down all the blocks perfectly every single time. We are not only going to tell you exactly how to aim every time, but also what not to do if you want to achieve very good scores, and collect the Gems!

By now you probably noticed that the objective of the game is to knock down all of the blocks – well, it might not be as easy as it seems sometimes! There are some levels which will make you super angry because of the moving tiles, but don’t worry about them now, because I got you covered!

If you want to learn all of the Pot Shot tips and tricks, then let’s get started, shall we?

This is a tip that will help you get a better, steady aim at the blocks. You should never rush to hit them, because there is no timer! So if you start shooting as soon as the cannon loads up, then you might end up wasting the shot and making it harder on yourself to pass the stage. 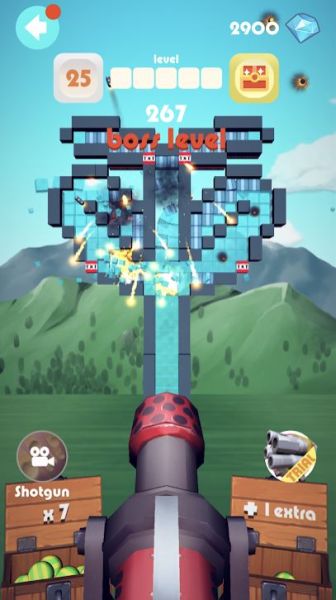 I suggest always keeping your calm, because it’s not such a big deal! If you fail to pass a stage, there are things you can do! Just check down below!

Get some extra balls!

If you happen to fail at a stage and you only have 1-2 blocks left to kick down, you can watch an ad to receive +3 Extra Balls! This is awesome if you are at the boss stage or at one of the toughest levels that you can’t pass, because it will allow you to continue where you left off!

However, if you are just getting started, it’s not that useful to use this boost if you fail because if you are stuck later on, it might be better to use it then!

While on the main interface (home interface) you will see on the bottom side of the screen 3 buttons. If you tap on the first one you will be able to switch your cannon to a different one. There are quite a lot of cannons you can pick from, and you will unlock new ones every few levels.

The better cannons you unlock, the better your shooting skills will be, because you can fire stronger ammo! 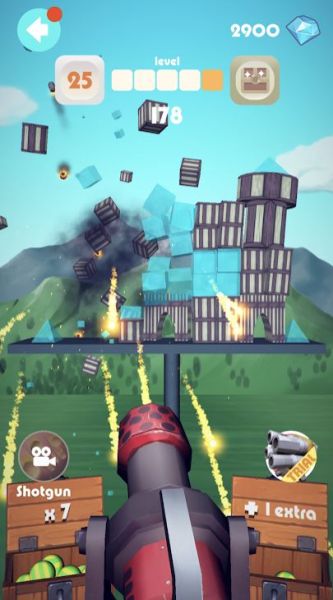 Get a change of scenery

If you get bored of the same old background, don’t worry because every few levels you will unlock a new one, and if you keep on unlocking lots of them. Picture this: there are 18 backgrounds that you can unlock up to level 830! That’s quite a lot of unique ambiances and changes of scenery.

Always aim for the weak spots

Whenever you see the blocks stacked up on top of each other, you need to think about what their weakest spots are: for example, if they are all stacked on top of 1 block, then that single block is the weak spot.

Always think about the physics of the game and where it would be the best spot to hit in order to knock them all down with as few balls as possible. Since the blocks follow a certain physics, they will knock other blocks down if hit, so try to always picture the trajectory of the blocks.

For example, I always prefer to hit right between four blocks (in the intersection of the four actually) because that way you avoid simply knocking down one single block and instead you are kicking all four of them. I have found that this works exceptionally well with all types of blocks, and it’s very easy to do also. 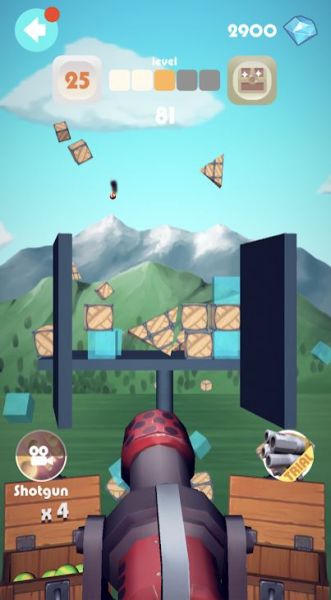 Watch an ad to get more rewards!

If you have defeated a boss, you will receive a box containing Gems. Whenever you are in the box interface, you can choose to watch an ad and spin the wheel of fortune for a chance to get 10x the bonus rewards.

If you want to collect Gems much quicker, this is the way to go. You can imagine that it is not going to be easy to get 10x the bonus, but it will still be a good addition to the Gems you already got.

Take your time and watch the pattern of the moving walls

The moving walls can be some of the most annoying parts of the game. They will block your view and occasionally hide some sneaky blocks behind them. You should not rush when seeing them, and instead analyze their patterns and see if there are some blocks hidden behind.

If so, carefully spend your balls and try not to waste any of them – because who knows what might happen and you will be in need of a couple of extra balls!

Having a tough time? Fail on purpose

It might sound odd, but it works. Whenever you are dealing with some levels that make you want to pull out a knife and stab those boxes yourself, there is something you can do to avoid all the unnecessary rage.

Just fail on purpose and the whole stage will get reset – that’s right. The whole stage will receive different levels, so you might not run into the same stress-inducing levels that make you want to rage. This is a great way to play the game as chill as possible, and without a worry in the world – because anything can be done! 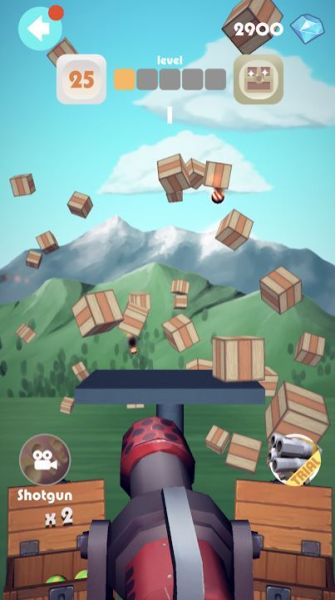 You see some TNT? Blow it up!

If you happen to have some TNT boxes in your level, you might be in for a hot and explosive surprise. Whenever you shoot those TNT boxes directly with the ball, they will explode and clear most of the blocks away. Therefore, make sure you hit them whenever you see them!

These would be all of our Pot Shot tips and tricks that we have for you right now! Do you know some other cool tricks to help you pass the stages? If you do, then share them with us down in the comments below!