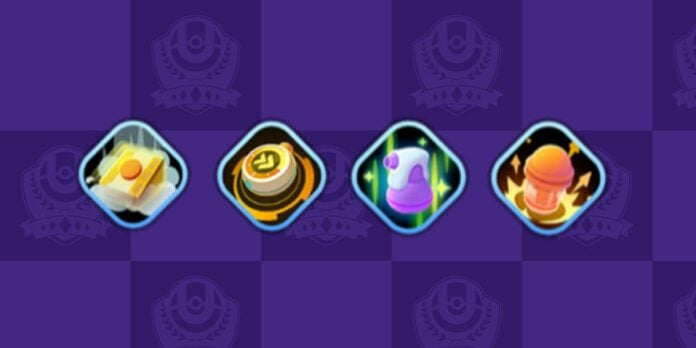 Held Items are obtained by purchasing them at the Aeos Emporium with 1000 coins or 625 tickets.

Which are the Best Held Items to Bring to a Battle?

We have sorted the Held Items by versatility and general use- which are the best to stock up on and upgrade first, and which have more specific roles recommended for more advanced players. As you play and become focussed on a particular role in a battle you may decide to focus on more a more specific Held Item to boost your Pokemon’s stats.

Float Stone is perfect for any Physical Attack Pokemon and increases movement speed by 10% when not in battle.

Shell Bell is perfect for any Special Attack Pokemon and restores at least 45 HP when you perform a move: the higher the Special Attack stats, the more health is gained back.

Exp. Share is best for supportive team mates and helps Pokemon who are falling behind with Experience Points. When the Pokemon has the least EXP of all their team they gain 2EXP every 2 seconds but will not gain assist EXP when a teammate defeats a wild Pokemon.

Buddy Barrier is best used by supporting and defending Pokemon. When the Unite Move is used the Pokemon and their nearby allies are granted shield equivalent to 20% of their max. HP.

Muscle Band is best used by any Physical Attack Pokemon, as well as all-rounders and speedsters. When the Pokemon lands a successful basic hit it deals additional damage equal to 1% of the enemy’s remaining HP.

Focus Band can be equipped on any defending Pokemon. When the Pokemon reaches low HP it can recover up to 8% of the damage taken up to that point, every second for 3 seconds.

Rocky Helmet is great for defending Pokemon, and some all-rounders. When you are attacked damage is dealt to nearby enemies- equal to 3% of your own max. HP.

Scope Lens works well with Pokemon with high base critical hit stats. This item increases the critical hit damage made by basic attacks- the higher your attack, the more bonus damage occurs.

Attack Weight is an item best used for aggressive attackers and goal scorers. Pokemon’s attack increases by 6 when they score a goal.

Assault Vest works best on defending Pokemon in a specific situation- when not in battle Pokemon gain shield equivalent to 9% of their max. HP and makes them immune from Special Attacks.

Aeos Cookie is good for Pokemon who intend on scoring goals as they gain 100 HP when they score a goal.

Leftovers is an item for most Pokemon but not particularly useful as it only provides 1% of its max. HP every second they are not in combat.

Score Shield is an extra bonus for goal scoring Pokemon- gain a shield equal to 5% of your max. HP, and when the shield is in use goal scoring cannot be interrupted.

Energy Amplifier is a powerful item if played correctly but is best suited to strategic veterans of the game. Damage is temporarily increased by 7% when a Pokemon uses the Unite move.

Related: Pokemon Aeos Coins: How to Obtain and Use Them

The best thing to do is familiarise yourself with each item and, in time, find out your own gameplay style. That way you can eventually decide which items are worth buying and upgrading most for your chosen Pokemon with your chosen style of gameplay.

As each has their own use you may find it best to try out various builds, and before long you and your Pokemon will be unstoppable!