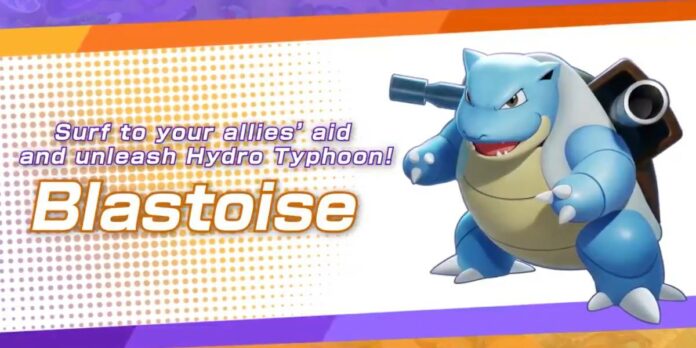 Before Pokémon Unite was even released on the Nintendo Switch, the official Twitter account teased that Blastoise was going to be one of the first new Pokémon added in a future update. We ended up getting other Pokémon instead, but that’s OK because Blastoise is officially coming to Pokémon Unite on September 1st!

That’s right, the armored turtle Pokémon Blastoise is blasting its way onto Aeos Island! Blastoise is a defender that brings a lot of powerful water attacks to the fray. With Rapid Spin and Surf, Blastoise can quickly travel to where it needs to be in a fight and disrupt enemies in the process.

Blastoise was previously in the beta for Pokémon Unite, though we’re sure that its attributes and move properties have changed slightly since then. Blastoise seems to be still packing the same moves it had, like the aforementioned Rapid Spin and Surf.

In the Tweet’s preview video, you can also get a glimpse of Blastoise unleashing its unite move, Hydro Typhoon. Blastoise spins in place while firing both of its hydro cannons out, dealing damage and throwing all enemies nearby. Blastoise is also shielded during the unite move, making it a great tool to throw off the entire enemy team.

We hope you’ve saved up some Aeos coins! Are you excited for Blastoise? Sound off in the comments if you’re ready to unleash Blastoise’s cannons in battle!