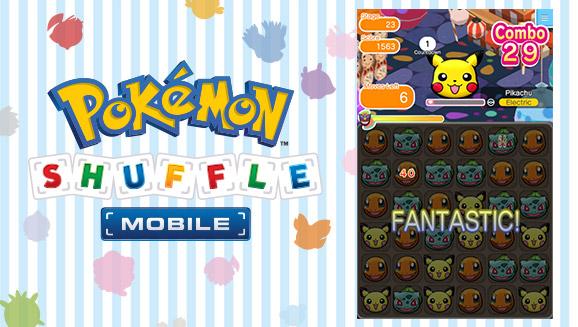 Pokemon has finally come to iOS! Pokémon Shuffle Mobile is a port of the match-3 puzzle game originally released for the Nintendo 3DS. It has everything you’d expect from a match-3 game, but with added pokemon flair! Capture and train different kinds of pokemon with the help of our Pokémon Shuffle Mobile cheats, tips and tricks strategy guide!

Before tackling each pokemon, you have the option to optimize your team. This function automatically fills up your four slots with the best possible pokemon to fight with. Let’s say you’re going up against a grass type – the optimize will put as many fire pokemon on your team as possible.

2. Be efficient for higher chances of capture!

If you can defeat a pokemon with a bunch of moves left over, not only will you gain more points but those extra moves will add onto your capture chance! Try to be efficient with your moves for the best possible chance at capturing the pokemon.

3. Try to match the advantageous pokemon as much as possible!

Hitting the enemy pokemon with an attack its weak to does double damage. If you brought a pokemon that has the type advantage (which you always should since you’ll be using the optimize button), try to match that pokemon as much as you can. You can see why it’s very helpful to bring as many type advantageous pokemon as possible, as you can essentially make all of your moves super effective!

Aside from type, each pokemon has a passive ability that can activate under the right circumstances. For example, some pokemon have an ability called “Power of 4,” which makes them do more damage if you match that pokemon in fours. Some abilities are always active. Check the pokemon’s info for more details!

As with any other match-3 puzzle game, combos are key to maximizing your play. Each successive combo increases your damage multiplier. A well placed combo can take out a nice chunk of the pokemon’s HP if not outright defeat them! Try to predict where pieces will go and play accordingly.

For players who played Pokemon Shuffle previously on the Nintendo 3DS, check your information on the 3DS game. You’ll get a code to redeem in Pokemon Shuffle Mobile that rewards you with a Lucarionite! This allows the pokemon Lucario to mega evolve!

Going off of that, if you have a pokemon that can mega evolve, match that pokemon as much as possible to get them actually evolve. When a pokemon is in its mega form, special abilities are unlocked. The first mega pokemon you’ll get is Mega Audino, and when its matched it will automatically match surrounding pokemon. Very helpful! Experiment with each mega stone you get to witness the powers of mega pokemon!

After you receive Mega Audino, you’ll unlock access to the event levels. These levels change periodically but they offer a shot at capturing some really rare pokemon. Heads up though! These pokemon are exceptionally strong so it’s heavily advised to build up a team that has type-advantage over the pokemon you’re trying to catch.

That’s all the shuffling we can do for now. If you have any other tips or tricks, let us know in the comments below!