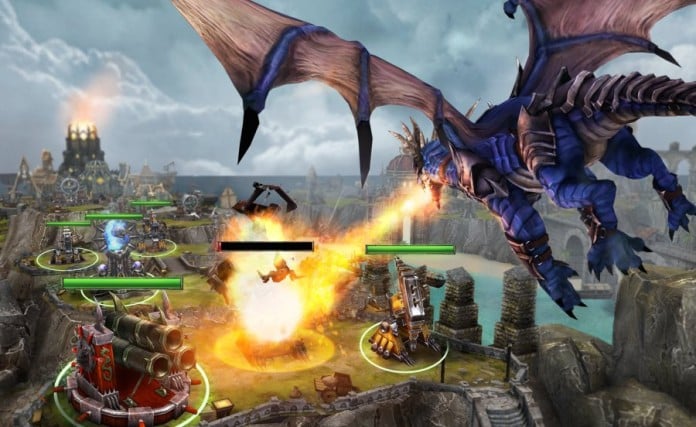 We know Pocket Gems for some really great games that cater to a more casual audience (Episode – Choose Your Story, Campus Life etc) so I was really surprised when I heard that they’re about to launch a 3D real time strategy game that features a ton of dragons and multiplayer battles. The truth is that War Dragons – because that’s the name of the game – looks like an extremely exciting and addictive products.

Since the developers surely know just how much we love dragons, they decided to bring into the game no less than 70 different ones, each with a unique set of spells, including hunter, warrior, and sorcerer classes that allow us to wreak havoc amongst enemy kingdoms. Because, yes, there’s also a heavy multiplayer element in War Dragons that makes everything that much more interesting.

So, in other words, we’re talking about Clash of Clans with dragons, amazing graphics (really, some current generation video games would really bow in front of the game’s graphics) and some new elements that will certainly get us hooked instantly. And we have a short launch trailer that proves that I am not telling any lies:

Back to the game’s mechanics, you will be able to build up your kingdom from the ground up and defend it with lightning towers, ballistas and other structures, join guilds and team up with allies to destroy common enemies (there’s PvP and team-based multiplayer). And, of course, there’s a ton of dragons waiting for you to breed and train them like the “way better than Daenerys Targaryen that you are!”

War Dragons is available for download on the App Store starting today and you can play it on your iPhone, iPad and iPod Touch. Right now, it’s only available in the U.S., U.K., Australia, Ireland, Canada and New Zealand.