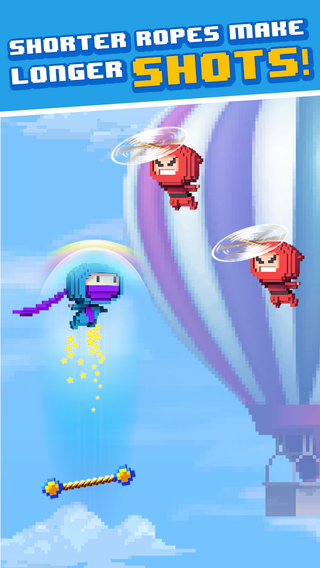 Gameloft is probably one of the most prolific mobile teams ever, releasing a lot of different titles which also manage to become somewhat successful, like the Modern Combat series and a few others.

The team has released a brand new game today, a platform game that is engaging enough even without being overly complex.

Ninja Up! is a really simple puzzle game where the player has to spring a Ninja has high as possible. To do this, players will have to draw platforms where needed, which are used to spring upward even more. Smaller platforms come with a risk, as it’s easy for the Ninja to miss. At the same time, they’re the ones that can spring him upward faster so there’s a reward for taking the risk.

Obviously things are not going to be as simple as they seem, as players will have to avoid several different traps, including other ninjas and more.

An incentive to play comes from the Facebook leaderboards so you will definitely want to go as high as possible if you have lots of Facebook friends playing the game.

Ninja Up! is an enjoyable experience that will not be remembered for any really innovative feature but just for the simple fun it provides. Which is what really matters in the end.

Ninja Up! is now available on the App Store. The game can be played on both iPhone and iPad.

Platform Game Ninja Up! Now Available On The App Store