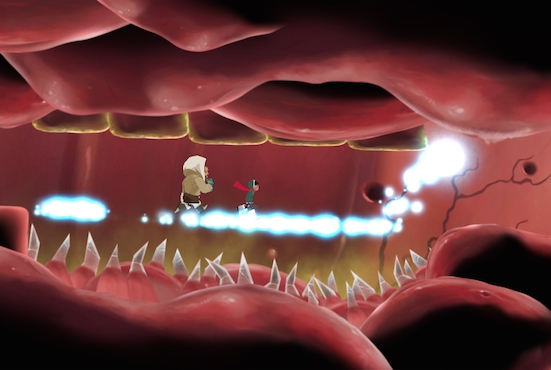 Puzzle/platform games have found some truly fertile ground on iOS, with several games released in the past few months. Those fearing that more games like this aren’t going to be released in the future can rest easy, as another interesting title is going to become available later tonight on the App Store.

The new game, called Last Inua, is a platform game set in a snowy environment. The tewo main characters, Atataaq and his son Hiko, will have to cooperate to be able to clear all the puzzles and move in their adventure. Atataaq is able to jump over gaps and punch whole Hiro can create bridges and jump through portals.

If you have played the classed The Lost Vikings, you already know how the game works, as some synergy between the two characters is required at all times. Last Inua is almost a modern take of the gameplay formula of the Blizzard title, with some clever puzzles and idea, and a really beautiful graphical style.

Last Inua launches later today on the App Store for the price of $3.99. Take a look at the game if you’re looking for a charming game that will also require you to do some thinking to complete it.