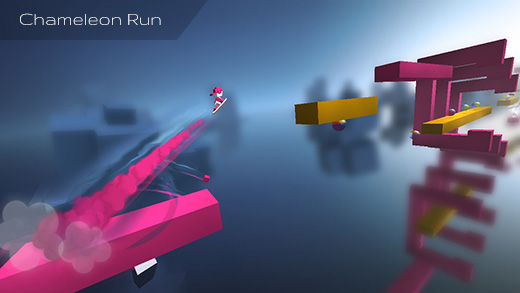 A new platform game is going to be released soon on the App Store, a game that promises to be quite fun thanks to its gameplay features and unique art style.

The new game will be called Chameleon Run, and it’s been developed by the team behind other nice iOS titles such as Lums and a few others. In Chameleon Run, players will control the game’s main character as he automatically moves through a variety of stages. What will set Chameleon Run apart from other similar games are some of its gameplay features, such as the need for correctly timed jump to move from one platform to another, leaving a colorful trail behind which gives the game a rather unique look.

As in several other platform games, timing jumps correctly won’t be the only thing to do in Chameleon Run, as players will also have to avoid a variety of obstacles, choose different paths and much more.

Chameleon Run launches on the App Store next month, on April 12th. You can check out the game’s colorful gameplay experience by watching the video right below.