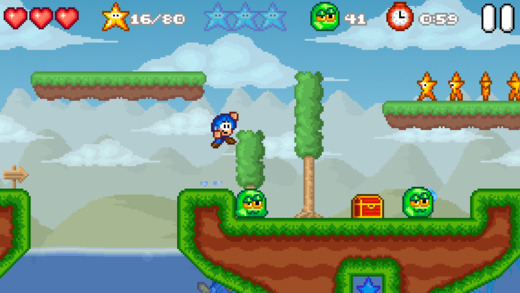 The 2D platform game Bloo Kid 2, developed by Wonderworks and now available for free on the App Store, has received a new update which expands the game with new levels and more.

The big new addition to the game included in the new update is the new fifth world, which includes 9 new levels to explore. The new stages are just as good as the other ones, sporting an excellent design and plenty of secrets to find.

The new Bloo Kid 2 update also includes two new game modes which add a bit of variety to the game, Time Attack and Boss Rush. In Time Attack mode, players will have to complete stages as quickly as possible while in Boss Rush mode they will have to fight against all the game’s bosses one after the other. These two modes will be unlocked after completing the game once. A new difficulty level called Nightmare will also be unlocked by completing the game.

Bloo Kid 2 is an excellent 2D platform game sporting all the features fans of the genre expect out of their games like colorful graphics, excellent level design, plenty of secrets to find and enemies to defeat and more.