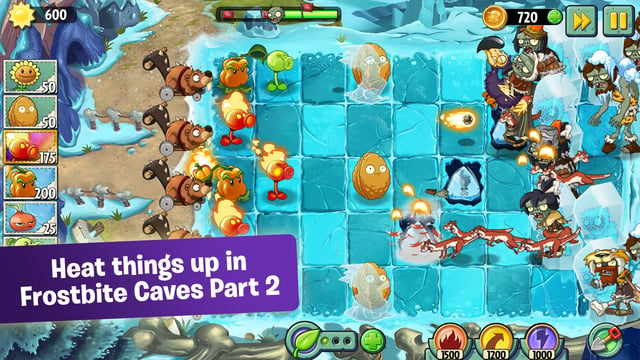 Plants vs. Zombies 2, the successful tower defense game developed by PopCap Games, has received a new update today which adds new enemies, plants and stages to the game, expanding it considerably.

The new update is the second Frostbite Caves update and adds the Weasel Hoarder and Troglobite zombies as well as the Fire Peashooter, Stunion and Rotobaga plants which will help players in dealing with these new fearsome zombies.

The new additions of the second Frostbite Caves don’t end here. The update also includes a new Dr. Zomboss and a new endless zone called Icebound Battleground which will put players’ skills to the test with endless hordes of zombies.

Outside the Frostbite Caves updates, Plants vs. Zombies 2 has received several other updates in past months which added new map designs, new levels such as the Piñata Party stages, the new enemy Gargantuar and much more.