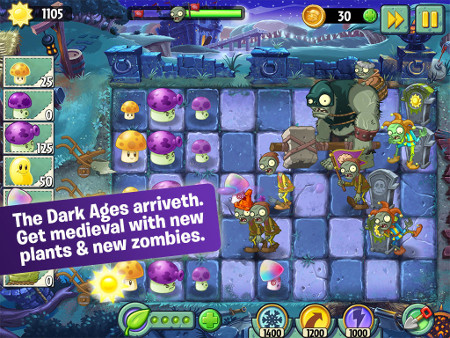 A new update is going to be released soon for Plants vs Zombies 2, the latest entry of the series released last year on iOS by PopCap games.

The first part of the Plants vs Zombies 2 Dark Ages update also included new plants, new enemies and some new tombstones. The overall difficulty level is also higher in the new stages as they’re all set at night. And zombies are way more powerful in the night, as everyone should know by now. The fact that stages are all set at night also bring some new gameplay features which are a refreshing change of pace for the game.

Plants vs Zombies 2 is now available for download on the App Store. The new Dark Ages update will be released tomorrow so make sure to download it as soon as possible to enjoy the brand new content.