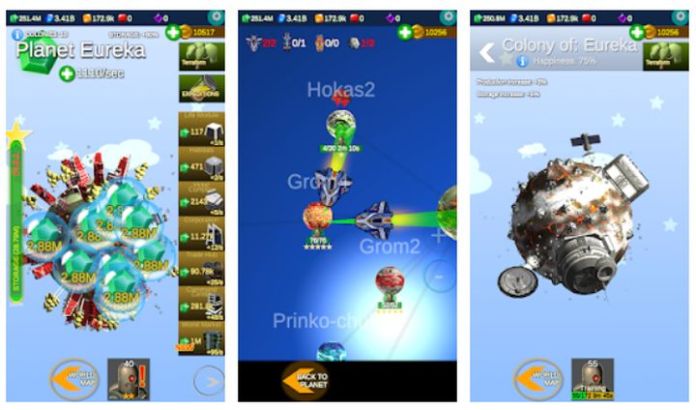 Planet Pi is a really fun – even though very slow paced – idle game for mobile, one that I really fell in love with lately. And I decided to come share some Planet Pi tips and cheats for you in today’s guide.

What makes it more special than most other games out there is the fact that, even though free to play, Planet Pi is not ad supported. There are IAPs in the game – which can really speed up your progress – but otherwise, no ads to upset you ever. Really cool and unexpected.

Now let’s move on and check out some Planet Pi tips and tricks below, so that you can progress faster, unlock more planets and have more fun overall.

While it is mostly an idle game, Planet Pi also has some light clicker elements. For example, you can tap a planet at any moment in order to gain a bunch of resources (but the numbers are really low).

However, more often than not, a cargo ship will fly over the planet, holding 9 loads of resources. Tap those at all times, as the resource loads give you a lot more than the regular taps.

Even better, you can easily move to the next planet after collecting from one and there will be a cargo ship there as well. Rinse and repeat, going from a planet to the other as soon as you’re done with a cargo ship and you’ll get a nice boost to your resource packs.

Buy upgrades to get the biggest bang for your buck

Each planet allows you to purchase some otherwise expensive upgrades in order to boost the idle production of resources.

However, unlike in most other games, the newest upgrade you have unlocked is not automatically the best option in terms of actual value that you’re getting per resource spent.

Always look and do the math: you will be surprised to find out that it’s usually (and for a long time) much more profitable to keep buying the lower priced upgrades than investing in the more expensive ones.

As soon as you purchase an upgrade, the price of that particular one increases, so make sure that you’re always keeping track of costs and profits in order to optimize your planets’ growth.

You should start attacking nearby colonies as soon as possible and conquer as many as possible in order to boost production. Each colony will give you at least 5% boosts in storage and resource production and the more you have, the better.

However, you should be able to protect them, as most likely they will be attacked back by the factions you’ve taken them from. In other words, before sending your troops to attack a colony, make sure that you have saved enough resources to buy 1-2 upgrades immediately after conquering it, so that you can defend it from incoming attacks.

It’s very easy to anticipate how many troops you need to keep inside a colony in order to properly defend it: just look at how many troops are stationed in nearby colonies owned by the faction you’re attacking.

For example, if you’re attacking Grom 1 and the nearby Grom 2 has 20 units, expect them to send 20 units your way constantly.

Even after successfully fending off an attack, you will still get some rebel forces reducing the positive effects of your colony. Make sure to regularly check those attacked colonies and tap the clouds of rebels to get back on track.

While the sheer number of troops is always a good indicator on how successful you will be in battle, having the best available troops is also a must, especially since your opponents will get really tough very fast.

So keep an eye on your troops on each of the main planets and constantly invest in researching better units. Research takes a lot of time, so make sure that you’re always working on something.

The Planet Pi game also allows you to terraform planets and colonies in order to boost productivity. However, you should focus on terraforming the main planets first and the colonies second, only if you have no other main terraforming upgrades to purchase.

If you terraform the main planet, you you get a bonus to the happiness of all the colonies in that solar system.

On the other hand, if you terraform a colony, you only boost the happiness there, even though the costs are the same with terraforming the main planet.

You need resources (called “Elements” in the game) in order to grab those Terraform upgrades, and they are very difficult to get – like most things in Planet Pi.

You can send expeditions to get extra resources, but these are really expensive. Make it your goal to reach the amount required to send an expedition as soon as possible and send it ASAP, knowing that there will be a while until you’ll be able to send the next one.

Another way – usually easier – to get extra resources for terraforming is attacking colonies. Each time you successfully attack a colony, you also receive some random Elements. Another reason to keep getting those colonies!

Invest in some boosts!

The advantage of the fact that Planet Pi doesn’t have any sort of ads is that you’re never forced to watch them. There’s also a disadvantage coming from this, though.

In most free games, watching ads gives you the chance to unlock some sort of bonus, boost production and get resource. Planet Pi doesn’t have ads, so there are no bonuses to be earned for free.

However, you can spend some real life money to get some more than useful boosts: not only that you’ll get to progress much faster, but you also repay the developers of the game for their good work.

And you don’t have to spend a fortune! Even investing in the second pack in the store (to buy 1,000 gold) will give you a nice return in-game:

This would be our Planet Pi game guide. If you have other tips or tricks for fellow players, don’t hesitate to let us know by sharing your comments below.