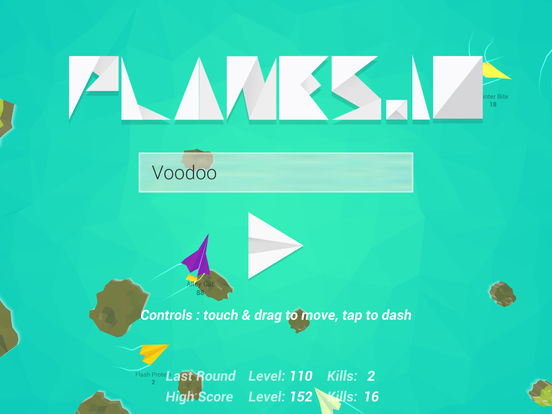 Ready for another .io game? Planes.io takes the familiar multiplayer battleground but throws in something a little less “weighty”. This time you’ll be the pilot of a paper airplane! Take part in epic dogfights as you dash into other players’ airplanes and rip them to shreds! Collect the leftover fragments to power up your own paper plane and dominate the scoreboards with the help of our Planes.io cheats, tips and tricks strategy guide!

The meter underneath your paper airplane is your dash gauge. Try to use your dashes in quick, short bursts rather than dashing the entire gauge away. If you use up your entire gauge you might have no energy left for an emergency maneuver; you’ll be wide open to counter attack! Conserve your energy and only use more than half of it if you’re guaranteed a kill.

Remember that there is no inherent collision damage! If two planes collide at neutral speed, nothing will happen. It’s only when a plane is in the middle of a dash where damage starts happening. Remember to also use the pointy end. You can actually take advantage of this! Try to use mind games on your opponents – bait them into thinking you’re going to dash in a certain way, then juke them and dash at them while they’re recovering. There’s an infinite number of approach possibilities, so use your head! Don’t just dash head first into an opponent, especially if they see you coming. They’ll know what you’re up to!

3. Stick to scavenging at first!

You can actually level up your plane as you collect the colored fragments lying around. You gain increased dash regen, your plane becomes bigger, and you do more damage on successful hits. So as you can see, leveling up is very important. When you enter the fray, don’t try to tackle anyone else yet. Instead, scavenge around for a moment. Random fragments will spawn around the board, so go look for those and power up a bit before you start fighting. Also, you can be a scavenger and hover around higher level players. Wait until they take out another player, then quickly swoop in and try to scoop up as many fragments as you can.

Keep in mind that depending on how big your plane is and your opponent’s, you may not destroy their airplane right away. Damage is calculated through the level difference. If your opponent is much higher level than you, you’ll need to land multiple pokes to take them out, which is obviously very risky. Be sure to check your damage and levels before you tackle an enemy airplane! You can play super risky and take on anyone you see, but just keep in mind that should they land a single hit on you, you might be toast!

If you don’t take out an enemy airplane on the first hit, they will most likely scramble after their fragments. Depending on how strong the hit was, lots and lots of their fragments will be scattered around. Enemies always seem to immediately try to recover as many fragments as possible when they’re hit, so use this to your advantage. Ignore the fragment for now and instead continue the chase and keep on the pressure. Hopefully the enemy turning around to gather fragments gives you enough of an edge to get another hit on them.

That’s all for Planes.io! If you have any other dogfighting tips or tricks to share, let us know in the comments below!