Home News Plague Inc. To Receive New Dawn Of The Planet Of The Apes... 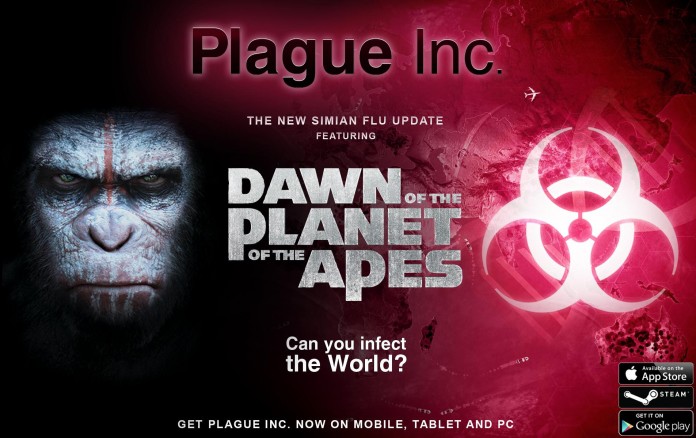 The nice strategy game Plague Inc., developed by Ndemic Creations, will soon be receiving a brand new update which will introduce some new content to the game as well as new features and more.

Fans of The Planet Of The Apes movies will be happy to know that the new update ties in with the new moves Dawn Of The Planet Of The Apes. Following the Plague Inc. new update, you will be able to spread the same disease of the movie into the game. Killing humans isn’t the only thing this new disease does, as you will be able to control some really intelligent apes, which can be used to bring the end of mankind in an even faster way.

Apparently this new update is almost a natural evolution for the game. The game’s creator James Vaughn has confirmed that he was actually inspired by Rise Of The Planet Of The Apes. The ending credits scene was actually what inspired the man to create the game.

The new Plague Inc. update will soon be available for download on the App Store so make sure to download it again to deal with a new disease and plenty of highly intelligent apes.

Plague Inc. To Receive New Dawn Of The Planet Of The Apes Themed Update