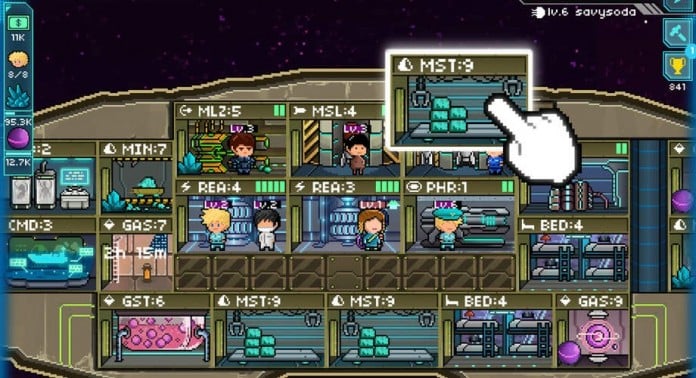 Savy Soda have just launched Pixel Starships on the App Store and, even though at the moment of launch the game is extremely buggy, slow paced and difficult to understand, it is a game that has a ton of potential and hopefully all the problems will be solved in future updates. Until then, we’re here to help you out with some Pixel Starships cheats: tips and a complete strategy guide on how to get better at playing the game, build the ultimate starship and conquer the galaxy. Prepare for a long – but hopefully fun ride!

So let’s not waste a single second and let’s check out below Touch, Tap, Play’s Pixel Starship tips and tricks!

1. What race or faction to choose?
When you start the game, you have to choose a faction to play as. At the moment, the choice is permanent, so go for those that you feel you like the most. There will be no real difference in gameplay or missions progress (or rooms to build, apparently), but you will get a different ship design and different characters. However, this is not a game changing decision.

2. Focus on resources first
Resources – specifically Minerals and Gas – are the ones that you need in order to progress, so you should focus on getting as many of those as possible, as soon as possible and use them to build/upgrade your ship as soon as you have them. Get a Gas Collector room ASAP, then the Mineral Storage room, otherwise progress will be extremely difficult. Complete the missions (focus on Explorations and not the green highlighted ones) in order to get more resources and build up your ship. Stay away from PvP until you really know how to play the game.

3. Build and upgrade your rooms
All rooms are important on your starship, but a few stand out. Apart from the resource ones that you should build and upgrade constantly, I suggest focusing on the Reactor (to have more energy during fights), Shield and Weapons. Tap each room and see the requirements, then plan your moves ahead a little bit and upgrade them completely before upgrading your ship (which unlocks new possibilities and levels for already built rooms).

4. Recruit extra crew members
Even if you don’t have enough beds for them, you can still recruit crew members – and you should always do it when you have some extra minerals to spare. This helps you get the best possible stats for crew members when you unlock new Beds on your ship. Better crew are those who are rarer, but also check out their stats to make sure that they’re the ones you need on your ship. Each crew member has different stats (Pilot, Shield, Engine and so on), making them a better or worse choice for the said room. It’s unclear at the moment how much they actually affect the rooms they’re assigned to, but hopefully the numbers are there to actually matter.

5. How to win your battles
Battling other starships (either in the missions or PvP) is by far the most fun part of Pixel Starships, and this is an art that’s easy to master. Basically, if you manage to destroy the opponent ship’s reactor, it will have no power and therefore it will no longer fire at you. So the first thing to look at is the reactor Room and decide if you can defeat it: if it’s not protected or not of a high level, go for it and it’s an easy win.

You won’t be always able to take down the reactor room and then easily the ship. In this case, you have to take to things into account: enemy crew placement and shields/weapon. The Crew in your opponent’s ship acts like an extra shield (you need to shoot that particular room more in order to destroy it). If you can’t take out the Reactor room (for whatever the reason), you should aim at the opponent’s weapons and take them out, so that they no longer shoot at you. However, if their shield room has crew inside, you will have to take out that crew member first, otherwise the shield will keep replenishing and your life will be a lot more difficult.

Finally, look at the number of green bars on each room: the more green bars there are, the more shots you need to fire in order to destroy that room (and once the room is destroyed, to start taking down the HP of the enemy ship). In theory, you could destroy the Bedroom or resource storage room and keep shooting it down until you destroy the ship. So find the fastest way to do it, but take into account what I said above about how enemy ships function.

6. How to Defend your Starship
There are two types of ship defense you have to care about: when you’re attacking somebody in PvP or missions or when you leave the game and other players can attack you. Strategies should be different in each situation, so we’ll cover them both below:

a) When logging out of the game: leave crew members in the key areas of the ship: Reactor room, Shield room and Weapons room. I would personally risk it and have more crew members in the reactor and more in the Weapons room (at least one – the fastest weapon you have). This makes it difficult for attackers to destroy your Reactor room or take out your weapons and they’ll have a much more difficult time to win against you.

b) You might also have to do some repairs when you attack somebody: your crew won’t die when shot at, and they will repair the rooms they’re in. So Always start a battle with one crew in the reactor and one in the Shield room – then one in your fastest weapon. This will make it a lot easier for you to destroy the enemy ship, but if they do manage to target a room that you want repaired, you can also move your crew to that room (if it’s connected to the room they’re in by an elevator). Have in mind, though, that at the moment, you can only move one crew member to a new room once during combat. This might be a bug, or a feature – if it’s a bug, it will be fixed in a future update, but for now it’s worth having that in mind.

So this would be all for now in terms of Pixel Starships tips and tricks. If you have specific questions or, even better, if you have more tips to share with our readers – let us know by commenting below! 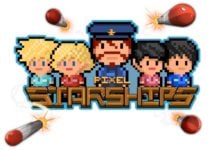 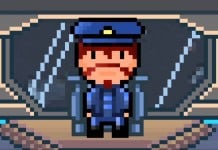 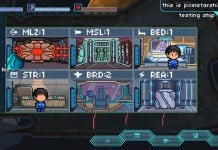