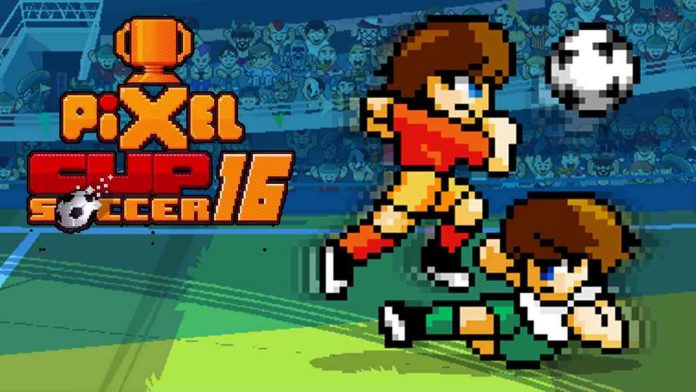 You’ve never seen soccer this pixelized before! Pixel Cup Soccer 16 is an all new classic soccer game for iOS, coming soon for Android. Pixel Cup Soccer plays like a typical top-down soccer game – you’ll be switching players on the fly, juking your opponents, charging up hard hitting shots, and defending your goal. You’ll be able to pick teams from around the world, each with their own stats, and of course with pixel looks!

Like most sports games, it’s all about skill here but we still have a couple tips to share with you in our Pixel Cup Soccer 16 cheats, tips and tricks strategy guide!

Something the game doesn’t tell you right away is that the pass button also serves as the player switch button. When your current player doesn’t have the ball, tapping the pass button will make you switch to another player who is closer to the ball. This is very useful, and is a lot faster than waiting for the game to switch you automatically!

If either you or an opponent player makes a long pass or shot, take your finger off of the digital pad. As the camera follows the ball, the game will automatically switch you to a player who is closest to where the ball is going to land. Sometimes the player in question will even move to intercept the ball as it’s coming down. However, the game performs this switch a little bit before the ball actually lands, so if you’re moving around at that time, you may accidentally move the player out of a good position. Head up, though – there might be opponents waiting to intercept the ball too!

3. Mix up your penalty shots!

When you’re running up to hit a penalty shot, keep your opponent guessing by switching up your shots. Don’t use the same type of shot twice in a row! The computer, especially on Hard difficulty, will catch on quickly if you use repeated shot angles. Try doing regular Power Kicks (use the shoot button) and try doing them uncharged. When charged, they move EXTREMELY fast and are hard to react to, but the computer might be able to catch it sometimes. Uncharged power kicks don’t go as fast, but they may throw off the opponent’s timing. Controlled shots (use the pass button instead of the shoot button) are even slower than uncharged power kicks, but opponents may not expect them if you’ve been using power kicks exclusively. Additionally, remember that you can aim either shot by moving the digital pad in the direction you want the ball to go. Keep your opponent guessing!

4. Juke enemy players before you shoot!

When you’re going for a shot on the goal, you will most definitely have an enemy player tailing behind you. Don’t ever charge up a shot if you have someone on you as they will nail you before you can shoot most of the time. Instead, you got to lose them before you go for a shot. No matter the difficulty of the opposing team, the computer players always seem to fall for the classic “run around in circles” trick! When you’re near the goal, run circles around the player who is chasing you. Get close enough so that they will attempt a tackle, then quickly dart out of the way. From there you should have enough time to charge up a shot!

That’s all for Pixel Cup Soccer 16. If you have any other kickin’ tips or tricks to share, leave a comment below!