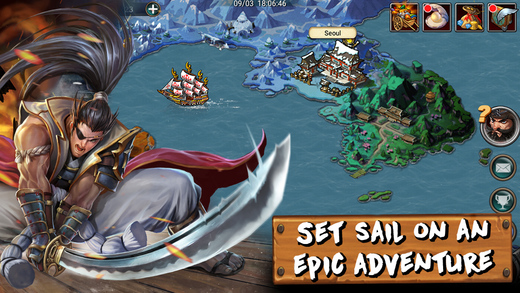 The seven seas are calling; adventure awaits! Pirate’s Creed is a strategy RPG that has you take control of a fleet of swashbuckling pirates. Pilot legendary ships, recruit infamous pirates, and become the ultimate captain. We’ll help you take out your enemies with relative ease with our Pirate’s Creed cheats, tips and tricks strategy guide!

1. Be sure to assign pirates!

Your ships are strong, but they’re missing out on a huge advantage if they don’t have any pirates controlling them! Be sure to assign attack pirates to the cabin of the ship, as they enable high-damaging special moves and boost your ships’ overall stats.

With that said, you shouldn’t put pirates around willy nilly. Each pirate has a ship type, whether it be attack or builder, and so forth. Cabins power up attack pirates, and storage powers up builder pirates. Be sure that you optimize your fleet to be the strongest you can be!

Having an optimize ship formation is key to victory! Ships come in three flavors:

As you level up, you will unlock additional formation slots allowing you to bring more ships into battle. Eventually you will be able to bring in a grand total of nine ships. Optimize your formation to conquer all!

Your beginning ships are only going to have two stations to them: cabin and storage. Cabin determines the ship’s attack power while storage determines the health. It’s very important that you upgrade these whenever you get the required materials as the stat jumps you get are very noticeable. Each storage upgrade gets you an extra 400 health!

5. Use your attack abilities right away!

Until you get auto battle, you will need to manually activate your pirates’ attack abilities. Each pirate has their own unique special attack ability that can be activated once their special meter is full (the yellow bar below their health bar). They can range from single to multi target abilities, and from attack to support abilities. There is usually little to no strategy involved with these abilities, so it’s best to use them as soon as you get them. Don’t save them; taking out the enemy ships as fast as possible is the best way to earn three stars.

You can open a gold chest for free every 10 minutes. You can do this five times a day. You can get some really good stuff, including ship upgrade components or pirate recruitment items, so be sure to collect your freebies even if you aren’t planning on playing the game for the day!

That’s all for now, but stay tuned, we’ll be back tomorrow with a location guide for the components of every single ship in the game, including the rare 5-star ones! If you have any other tips or tricks to share, leave a comment below! 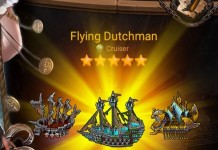 How to get all Ships in Pirate’s Creed