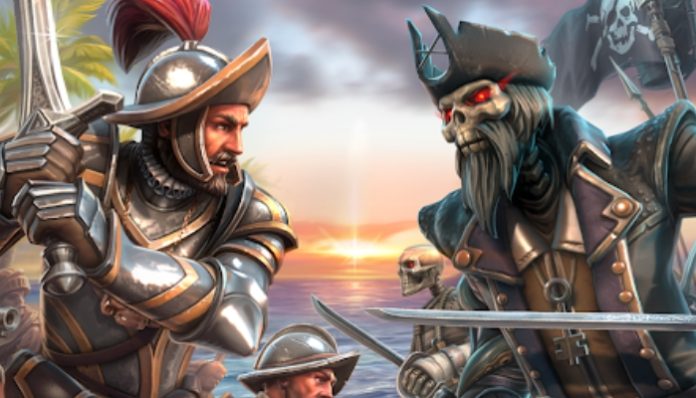 Pirate Tales lets you sail the seven seas and become a pirate captain! The world of Pirate Tales is home to many factions including the Empire, Tribes, and of course good old pirates themselves. Take command of heroes from each faction and battle in fast-paced skirmishes that require precision timing! Our Pirate Tales cheats and tips will show you how to master fighting like a pirate!

Pirate Tales is an epic mix of turn-based RPG with action-based combat. The combat system is simple at first glance, but there’s a lot of nuance to it. So, let’s get started with our Pirate Tales cheats, tips and tricks strategy guide!

Get the attack timing down!

The timing for attacking your enemy is pretty tricky at first. One thing to always keep in mind that the attack charges usually have a build-up time before they actually start moving. This is the number one thing that’ll probably throw you off when you first start Pirate Tales; you’ll be caught up in a battle and forget that the bar takes about half a second before it starts moving.

Once you’re aware of the start up time, make sure that you’re tapping earlier than later. Because of the nature of touch screens, it’s usually a better idea to tap earlier to compensate for the amount of time it takes for your finger to reach the screen. With these tricks in mind, you should be able to get the attack timing down no problem!

Watch out for the Free Attacks!

When your hero defeats an enemy, they may get a chance to attack the next enemy for free. The aptly named Free Attack occurs every now and then but there’s one important thing to keep in mind: the Free Attack does NOT have the start-up time that regular attacks do. This can catch you off guard if you’re not ready, so be vigilant whenever you take an enemy down!

Pirate Tales has a pseudo elemental typing system going on. As you learn in the tutorial, each hero belongs to a faction, and each faction has an advantage and disadvantage to another. For example, Pirates deal 33% more damage to the Tribes faction while taking 33% more damage from the Empire faction.

When you’re prepping for an encounter, you can tap and hold any of your heroes. If any of the opponents you’ll be going up are sworn enemies for them, they’ll begin to shake. Conversely, if enemies grow and glow green that means THEY have the advantage over that hero! It’s best to build a team that has the advantage over your enemies.

Use Tactics at the right time!

Tactics can dramatically change the flow of battle, but you’ll need to time them right to get the most out of them. Each faction has access to their own tactic, and stacking heroes of the same faction will amplify the effects of the tactic.

Since you’re probably going to have pirates in your team for a while, you’re going to have access to Fierce Strike for a while. This increases the amount of rage you generate from your attack, but also decreases the damage of it. The damage drop off is quite noticeable, at rank 2 clocking in at 30%. However, using Fierce Strike a lot will allow to use more powerful moves like Fatal Blow more often.

However, you should always think about tactics in the long run. You may take down an enemy faster by using regular attacks instead of hampering your attacks for a special attack, so choose wisely!

The Schooner is your starting ship and while it only has two rooms, they can help you a lot once you invest some upgrades. The Orlop increases your heroes’ health while the Captain’s Cabin increases the BP you earn from battle. Both of these are great and you should upgrade them as much as you can.

Adventures are timed quests that require you to send out a hero. Adventures can take several hours to complete, but they’re worth it! You can get some nifty rewards from completing them, including building supplies, treasure chests, and more. You’ll need to choose a hero from a specific faction, and we recommend sending your weakest heroes. They don’t need to be at an exact level, so save your stronger heroes for battling.

That’s all for Pirate Tales. If you have any other tips or tricks to share, let us know in the comments below!