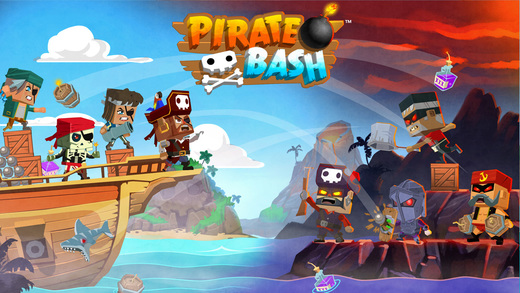 Have you ever wanted to build a hearty crew full of swashbuckling pirates? Now’s your chance with Pirate Bash! Pirate Bash is a turn-based physics action game that pits you and your rag-tag brigade of pirates against enemies from all over. Think Angry Birds, except with, well, pirates and you have Pirate Bash! We’ll help you get the most of your overseas adventure with our Pirate Bash cheats, tips and tricks strategy guide.

1. Take your time! Plan out your moves!

You aren’t timed when you’re making your pirate moves, so don’t rush. Remember, you want to try to defeat all of the enemies within a certain amount of turns in order to gain all of the level rewards, so precision is key! Aim carefully, and make sure to reference your old trajectories when making new shots!

2. Barrels can be saved for later use!

One of the starting pirates you’re given is a barrel tosser! Once you launch the barrel, you have a small window of time afterwards to tap again to detonate the barrel. This does decent damage and usually takes out obstacles and debris immediately. However, if you want, you can opt to not tap and the barrel will stay in its place. If it gets hit by anything else afterwards with enough force, it’ll detonate, so keep this in mind.

3. Bring the recommended pirates with you!

Each level has a recommended pirates list. If you’re just starting out,  I suggest sticking to the recommended pirates. Some levels are just better suited towards specific pirates, for example there is a level with a stairway like landform that ascends upwards. There’s an enemy on each step, which makes it perfect for the bow and arrow pirate to split his shot to hit all three pirates. Once you’re comfortable with your own custom crew, go ahead and bring whoever you like to the fray.

When a pirate receives an upgraded weapon, they will unlock their inner abilities! These abilities can be used once per level, so don’t hesitate to utilize them if the situation calls for it! For example, the barrel pirate’s ability calls down 3 barrels in random spots. Want to get rid of a big chunk? Use this ability so you can clear out a lot of space.

In general, bladed weapons, such as the bow and harpoon, do excellent damage against enemy pirates. They hardly dent obstacles, though. On the flip side, heavy duty weaponry like the explosive barrels and cannonballs are great for clearing out debris, but they don’t do as much damage as the bladed weapons.

You can find new gear by opening silver or gold chests using keys. Better gear will automatically replace your pirates’ old gear. If you need an instant power boost though, feel free to manually upgrade their current gear. If you go into your crew and check out your individual pirates, you can see they have a weapon, chest piece, and head piece. Head pieces increase HP and attack power while chest pieces only increase HP. If you tap on a piece of equipment, you can level it up by either 1 or 5 levels. Each individual item has its own maximum level, so if you’re finding yourself outclassed by the enemies you’re facing, try upgrading your equipment until you find better.

You’ll be stuck using the starting ship for a while, but once you’re able to unlock new ships, keep in mind the rule about turn order: the pirates closer to the front of the ship go first. When you’re positioning your pirates this is important to remember as you can strategize who you want to go first.

8. Make sure you fully complete the levels!

Getting a gold skull on a level is very important as you’re rewarded with a variety of gemstones. These gemstones are precious because each pirate can be upgraded, but they need a certain amount of gemstones in order to do so. The only way to get these stones, from what I’ve seen so far, is by earning them through the levels. Aim true and defeat the enemies surely but swiftly!

9. Watch the wind strength and direction in PvP!

When you’re dueling other players, you have to consider another factor: wind! Wind isn’t experienced in single player mode, but during a duel it affects your shot trajectories. Watch the wind, and compensate as necessary!

You should be ready to sail the seven seas now. Remember: accuracy and efficiency counts. Defeat all your enemies and become the number one crew! If you have any other suggestions or questions, leave a comment below. Until next time! 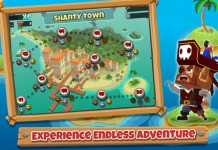