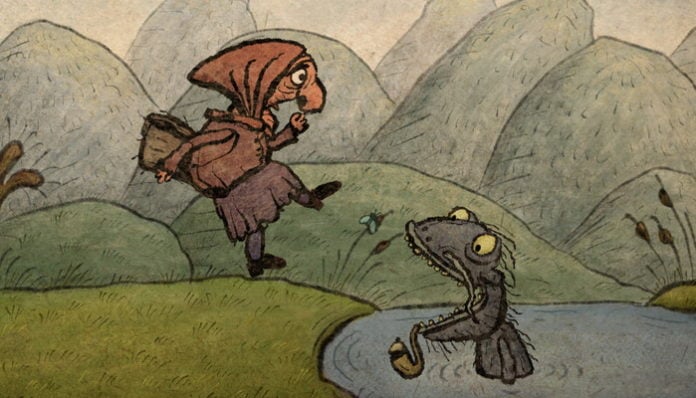 Pilgrims is a charming new adventure game from the minds that brought us Samorost and Machinarium. You play as a pilgrim exploring a wondrous new land with lots of friends to meet. Help your fellow pilgrims out and see their stories to the end; who knows what you will learn?

Tap on the hoe to pick it up. Use the hoe card on the dirt mounds and you will uncover some potatoes. Tap on the potatoes to pick them up.

Past the boat in the river lies a lit campfire. There is a cooking pot by the tree, so grab that.

The old man in the boat is missing the bird that usually perches on his boat. We will have to take care of that later, though. For now, use the cooking pot on the river to collect some water.

Head back to the campfire. Use the cooking pot filled with water on the campfire to boil the water, then throw in the potatoes to cook them. Collect the pot full of cooked potatoes!

You will see a hunter here spinning his revolver around. Tap on the acorn on the floor to collect it, then use the cooked potatoes on the hunter. The hunter will let you pass, also giving you a clue on how to get his revolver.

You will see an old farmer sitting by the bridge. Use the coin on him and he will be delighted, making him joyfully play with the coin. He will join your party afterwards, and new portion of the map will uncover.

At the bottom southwest corner of the new area lies the Farmer’s House. Collect the flowers, then switch to the farmer. You will see the backstory of how the old man with the broom stole it from the farmer. Leave for now.

At the bottom southeast corner lies the Leprechaun’s Post. Immediately upon entering, you will see a fishing rod and a sword sticking out of a hole. The leprechaun is feeling a little down, so you will need to use items in the right order to cheer him up. With the pilgrim, use the cooking pot, then use the coin with the farmer.

This will cheer up the leprechaun, and he will agree to trade his fishing rod for your coin. For the sword, you will need something else, so let’s move on for now.

All the way up north lies a castle. You cannot pull the bridge lever just yet, but go ahead and collect that white worm right below it.

To the northwest lies a waterfall and a nearby pond. Using the pilgrim, equip him with the fishing rod and use the white worm as bait to catch a fish.

Head to the campfire nearby the pond, then use the fish on the campfire to cook it. Before you leave, grab the mushroom and the rope, then refill the cooking pot with water.

In the central part of the world, there is a house right before the pond – this is the Bar. The barkeep has just what the hunter is looking for, but wants a cooked fish. Make the trade to get the drink!

Head back to the hunter to give him the booze. He will promptly get a little tipsy, so go ahead and give him the acorn after. The hunter will join your party!

Travel to the far east side of the world to find the Desert Hole. Throw in the mushroom, and a desert imp will jump out. Use the rope on him and he will join your party thanks to your antics!

Head back to the Farmer’s House, and have the desert imp use the rope on the old man to dizzy him into dropping his broom. While it is on the floor, tap on it to pick it up. Switch to the farmer, then have him use the broom on the old man. Poetic justice!

The old man is now furious, with flames literally spewing out of his eyes. Use the cooking pot full of water to douse the flames, and the old man will crawl away. The farmer will reclaim his house and leave the party, but you will be one step closer to catching that blue bird.

Go back into the Farmer’s House, and you will see him happily towing away at his garden. Use the pilgrim and the farmer will give him a nice sunflower.

Head to the Church, the northeast building in the central mainland. The priest here is not too friendly, so use a human character to make him come out. When he is outside, switch to the desert imp and use the broom on the priest to stun him, then use the rope on him to capture him!

At the northeastern most point, you will see the Bear Cave. There are many ways to subdue the bear, but the most straightforward way is to load the revolver with an acorn to keep the bear away. You can recover the king’s diamond from the cave after.

With the diamond recovered, use the hunter to pull the level to ope the way. The king will tell you of how the giant chicken dragon reigned terror over his kingdom, and he lost his diamond in the process. Give him the diamond and he will reward you with a bag full of coins!

Head back to the leprechaun. Trade him the sword for your bag of coins.

With the desert imp finally claiming his prize, send him back down his hole and he will thank you for your help, putting you one step closer to the blue bird.

Head up all the way into the mountains at the northwestern corner of the map to enter the Dragon’s Nest. You find out that he is not really interested in terrorizing anyone, he just wants to be friends with the princess.

Head back to the castle, then with the hunter out use the gun. The hunter will hold the king and princess at gunpoint, and the princess will begrudgingly join your party.

With the princess in tow, head back to the Dragon’s Nest. Use her card, then watch the two quickly become friends. The chicken dragon will hand over his treasure chest as thanks, and the hunter takes it and becomes the happiest hunter in the world. The blue bird will finally appear, and the pilgrim will take it.

Head back to the river and show the old man the blue bird. He is ecstatic and happily offers to row you down the river. Congratulations, you have finished Pilgrims!

That is just one way to deal with the adventure, however. Many of the puzzles have multiple solutions, so we highly recommend giving Pilgrims another play to see how many different solutions you can find! If you know any unique and fun solutions, let us know in the comments below.