Home Game Guides PES Club Manager Cheats & Tips to Get Your Club to the... 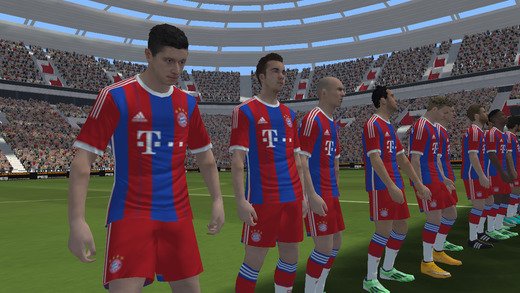 Konami has recently launched, on iOS, PES Club Manager – the first football management game in the history of PES available on Apple’s platforms. And even though the game lacks the depth of football management sims like Football Managers, it is a great new entry that’s highly enjoyable, especially since it’s free to play.

But we’re not here to praise the game, we’re here to talk about some PES Club Manager cheats and tips that will help you turn your club into the best in the world, so let’s not waste any time and let’s get this guide for beginners started!

1. Invest in young players because you’ll need them in the future. Build up your youth academy ASAP and make sure that you sign one or two of the most promising prospects each year (because after each new season, the existing youths will be reset so you risk losing them).

Also play them so they can improve their skills. Even though their ratings are, at first, lower than those of your older players, they will improve over and over again so you should keep playing them to make it faster. All in all, find at least three or four youths to replace the aging or already old dudes you have in your team.

2. Sell your unwanted players in order to save up cash and free up space for newcomers. Slowly start by taking out all your one star players, then work your way up to always remove the lowest star ones. When doing this, though, think about the future: old players that might retire and leave a gap behind or players whose contracts run out. Make sure that you don’t end up with too few players in your squad because later on, as you progress through the divisions and you need to rotate the players, you will need the extras!

3. Make substitutions around the 60th minute. I know that usually substitutes are made later on, but making them a bit sooner helps to actually get an advantage over your opponents who get really tired. Especially if you have players with the “Super sub” trait, make sure you use them like that for a boost and sometimes game changing appearance.

4. Only use the PES Coins to scout new players. If you can be patient, wait for the Scout x5 option, which requires 150 PES Coins, but the minimum quality you get for your players is 5 star (unlike the 4 star quality guaranteed for the single purchase). You don’t have to instantly sign the players you have scouted – they remain on your scouting list and can be signed at a later date.

5. Always keep an eye on the market. Although it’s pretty difficult to get some great players on the Market, you can definitely find good subs at great prices there. Just have a list of the positions you need to fill and constantly watch the market: wait until the bidding time gets close to zero and try bidding then. The less you spend on your new players, the better for the long run!

6. How to upgrade your Hometown
I would recommend starting with the things around your Stadium: The Youth Academy is a must early on to generate players (don’t forget to also upgrade it!), then continue with the boosters: Entertainment Facilities, Medical Facilities and so on. Don’t forget that you can also upgrade even more if you tap the Stadium – you can build up more stands, shops and so on. After getting everything done around the stadium, focus on generating more income because you will never have too much money in this game.

7. What’s the best tactic
Start by choosing the best tactic based on your players. I would personally suggest not to go with three attackers, but in the end you should test and try everything. Make sure that you have a tactic that allows your best players to play in each game because that’s where your bonuses come from. I am personally using, with great results, a 4-1-3-2 formation and I consider it one of the best available in the game since you can switch from focusing your passing on the flanks to the middle, depending on the situations.

Tip: Reduce the Game Speed to 1 when starting to alter tactics or making substitutions to make sure that you don’t lose too much in-game time.

8. In-game tactics and mentalities
I am starting all the games where I am the favorite with an Attacking +1 mentality and if I go behind one goal, I switch to Attacking +3 and leave it like that until I get into the lead. I also found out that setting the Attacking Area to “Through the middle” works better, while playing a possession game with aggressive pressing works wonders. In the end, try and test everything depending on your opponent and see what works and what doesn’t for your team!

9. Go in depth with your tactics
IF you’re still not satisfied with the default settings and tweaks you can make to your tactics, you can go in depth and set even more advanced options: in the end, these will make the difference and a fine tuned tactic will always work better than one you don’t really care about.

10. How to properly handle training
I would personally suggest to stay away from Special Training for the first 2-3 seasons, because you need a ton of training cones in the first place, you will change your team almost completely during this time and you need to know what you are doing and how skills are affecting the overall play. Also, it’s not unusual to get just a skill upgraded by one point after Special Training, so you really must do it only on your best players.

The general focus – which I always keep at Balanced unless I really have a player lacking a specific skill – is what automatically upgrades with every match day. Again, I think that keeping it a Balanced should do the trick unless you really have a specific player that needs to work on some specific skills – like youngsters developing their position skills.

Do you have other tips and tricks for fellow PES Club Manager players? Let us know by commenting below!