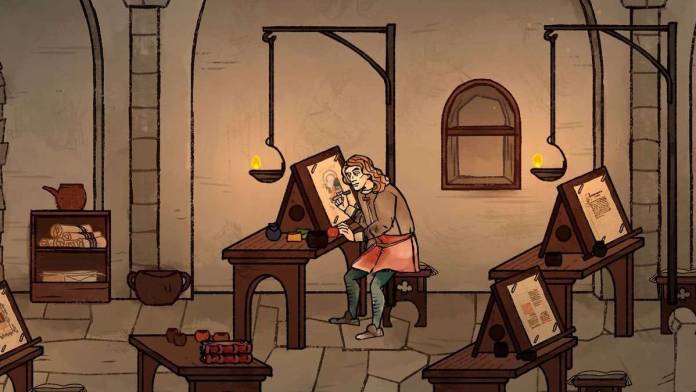 The events of Pentiment take place entirely inside a single village and the monastery that is located there. Despite this, the winding road ultimately takes you in a direction you do not expect. You won’t have to wait much longer to learn the reality behind this village’s deepest, most well-guarded secrets. The following post is a guide to Pentiment that will assist you with the final mural and endings.

Pentiment’s third and final act focuses completely on Magdelene’s endeavor to paint the final mural. That comes in contrast to the previous two acts’ investigations and murder mysteries. Yes, there are a few choices you must make, even if you will discover more in the future.

Werner will ask you what your plans are, and here are some possible answers:

The saints greeting the early Christians who settled the land.
The abbey was established by Lady Kiersau.
The best option is to have the Bavarians settle amid the Roman remains.

During the Christmas feast, you are questioned about the manner in which you would portray that unfortunate occurrence:

Respect the ideals that were held by the peasants. Otto is now delivering a discourse, and the duke’s men may be seen out in the distance.
Peasants are setting fire to the monastery as well as the mill, while Landsknechts are protecting the monks.
The remains of the abbey, surrounded by the living and the relatives of those who had passed away.

It seems that Andreas is still with us. He and Magdalene make their way down the crypt of the Rathaus until they reach a room in the Roman baths that has been abandoned for a long time. This path will take them to the bowels of the Church of the Labyrinth, where they will meet the prophetess known as Sister Amalie.

Amalie divulges the information that she has been the one composing the mysterious letters during the whole time. However, she was solely influenced by her guardian, Father Thomas, who was a manipulative person. Thomas concedes the fact that the Historia Tassae, a book that was in Baron Lorenz’s possession, reveals the truth about the origins of the town, namely that its revered saints were nothing more than different portrayals of Mars and Diana. The faith of the people will be severely tested if they are unable to maintain a believe in the divine. In essence, this is a component of the “pentimento,” which refers to the lines or sections of a drawing that indicate where the artist made the decision to deviate from the initial design.

When we think of religion or faith in the modern day, it may not seem like a very significant amount. Despite this, the narrative of the game takes place in the 16th century, which was a period when the Reformation and Counter Reformation were at their height, when the authority of the Catholic Church was in question, and when the peasants were ready to rebel. Anyway, Thomas is the one who brings about the fall of the pillars, which subsequently bury the sanctuary. Magdalene, Andreas, and Sister Amalie are able to flee, which is a tremendous relief.

Magdalene engages in conversation with a few of the locals, including Otto’s son. You are under no obligation to accept his proposal of marriage. If you feel the same way, be sure to encourage him to put it in writing.

After that, Magdalene goes to Prague, while Andreas, who has just shaved his head, remains behind to instruct children in the art of painting. I’m not quite certain whether the decision to wed Otto Jr. has any kind of bearing whatsoever, but you do get to see a family tree or something similar that demonstrates that they did in fact get married. You’ll also see that some of the other characters went and got themselves married.