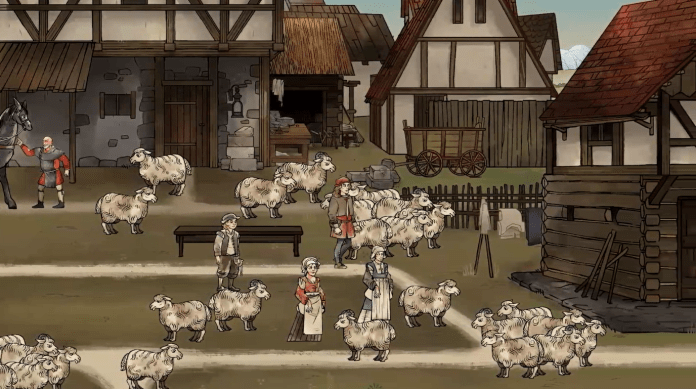 Reading the information that can be found on this page will teach you how to solve the second murder case that occurred in Pentiment. It is important that you be aware that this guide does, in fact, have spoilers.

You have a limited amount of time to investigate this second murder, which is less than a few days. The journey’s finish will bring you face to face with two intriguing individuals.

Martin Bauer – The owner of the eastern farmlands, which is where Ottila’s home may be found.
Hanna Berger – Golden Hand Inn.

Visit the Golden Hand and make sure that everyone has something to drink. Otto deserves your respect, and you should make an effort to get along with everyone.
The members of Josua’s family — Make jokes about how his children cause him to swear and offer details about how you’re attempting to solve a murder mystery.
Werner – It is not worth your time to share your opinions on Pliny’s writings. Repeat the story to Werner’s buddies about how he had a part in finding Otto’s corpse.
Werner will tell you that Otto had a scar when he was younger, but that it has completely faded away since then.
After the fight at the inn, you should talk to Josua once more. He would reveal to you that Martin reminds him of a totally different individual that he knew from a distant city.
Proceed to the Bauer family homestead located off to the left. You will hear from the non-player characters there that Martin looks to be a fake.
Proceed to the Bauer family property located off to the right. Talk to Martin’s mother and wife about the situation.
Finally, you should talk to Martin. It is possible for you to persuade him that he is a fraud if you have sufficient proof to support your claim. Because of the errors he has made in the past, he is making an effort to change, but he wants to keep his actual identity a secret.

Talk to Sister Gertrude who may be found in the convent. Describe to her how beautiful the flowers are.
Visit the Shrine of Saint Satia, which is located in the woods, in the morning. You may access a route by looking to the right side of the screen.
Andreas and Caspar, his apprentice, are buried alive after falling into a trench that connects to an old Roman aqueduct network.
Keep going forward in the tunnel until you get to the second entrance. Caspar has the ability to climb the wall and get a poker from the fireplace. This item may be used to shift the pebbles that are preventing Andreas from progressing through the previous room.
As you leave, you’ll be able to overhear Hanna and Lenhardt, the miller, having a disagreement. They are participating in an extramarital affair. Lenhardt is aware that Hanna is not the one who killed Otto, despite the fact that Hanna states that she wants Otto dead.
You may get to Lenhardt’s Mill if you head north of the chapel with the labyrinth within it. Participate in meals with his family and give your consent to go hunting. He will tell you that he has doubts about Martin and that he despises the peasants. He will also tell you that he despises the peasantry.

You’ll be able to level an accusation against a suspect before the conclusion of the second day, as follows:

Martin Bauer : It’s conceivable that Otto was aware of his true identity the whole time. There’s also the possibility that Martin had the intention of permanently silencing him.

Hanna Bergman : She did express a desire to have Otto removed from the situation in order to preserve the integrity of the shrine. Because of this, pilgrims are certain to stop in Tassing and, of course, at their inn.

Caspar will get advice from Andreas to flee town because of the commotion. This approach, on the other hand, was unsuccessful since we had been treating him with such kindness during the whole interaction. The end for Caspar is predetermined as well.

Lenhardt will defend the accused person no matter who you name in the accusation. He will say that they are safe since they are under his protection. In any event, the horde of peasants makes their way toward the mill. Things become much worse, as Lenhardt and the person you accused both end up dying in the ensuing fire. The crowd continues on its way to the abbey, and thus this development is not the end of the story.

They come to the conclusion that the abbot and the priests should be fired. Despite this, Peter makes the decision to set fire to the library. Andreas bolts for the safety of the house, terrified at the idea of having to start again and learn everything.

Pentiment: How To Solve Second Murder