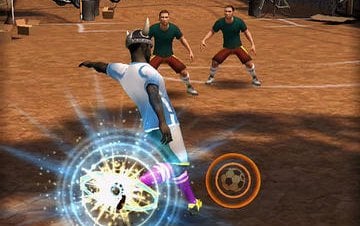 King Pele aka Pele: King of Football is a game based on (yes you guessed it, Pele). With the World Cup in full flow and the fact it is being hosted by Brazil, a game linked to the Brazilian legend is somewhat a nice coincidence, don’t you think? Regardless of the semantics, this game is good fun and has a nice flow to it so please read on for King Pele Cheats: Tips and Strategy Guide to help you score like the Legend himself in Pele: King of Football.

1. Power ups
As you progress through the game you will receive the options to use certain power ups. Use these to your advantage as some shots will seem impossible to score from without them. For example if there are too many defenders in your way to goal, and there is no clear gap or opening to shoot towards then the Ice power up will temporarily freeze the defence and stop them from moving this will allow you to shoot through a gap which was not previously there. There is also the option of buying power up clothing.

2. Stars
In order to gain maximum points there is a scoring system on where you place a shot. This works by rewarding each goal with either one, two or three stars. The more ambitious the shot then the more stars will be rewarded. For example goals in the top corner are rewarded more than goals towards the centre of the goal.

3. Moving defenders
A good technique to use is to hold and wait to strike the ball when defenders are running across the screen. They will move in certain patterns and there will more than likely be a gap left to score. If there is no space available then the Magnet power up is useful as it can be struck at a defender and still head towards goal.

4. Maximizing your points
There is an embedded mini game for your final match shot which requires you to follow the pattern on the screen. This is fairly simple however in order to get the highest score possible it is useful to pay attention to these shots and make sure you score as extra points are rewarded for scoring this type of goal.

5. Curling the ball
Some situations will seem difficult to score from when this occurs putting swerve on the ball can help to manoeuvre the ball around defenders, and also fools the goalkeeper. This is especially useful with headed shots, as it is difficult to put direction on headers, so a good alternative is to swerve the header instead.

These are our quick tips and tricks for Pele: King of Football. If you have others to share, let us know by commenting below.