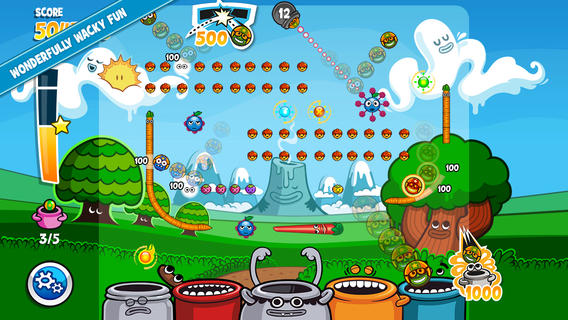 Papa Pear Saga is an incredibly addicting game created by the same minds behind another addictive game, Candy Crush Saga.

The latest game from the team is quite different from a gameplay perspective from their older game. Papa Pear Saga combines elements from bubble shooting and pinball games.

While the general premise can be quite simple, the game manages to become very addictive thanks to its never frustrating gameplay experience and charming presentation. The game has everything it need to become a smashing success on iOS powered devices.

If you’re getting stuck on some of the most challenging stages of the game, these small tips will give you a hand.

As you may already know, you can shoot multiple pears at the same time, up to three. While keeping some extra shots may be a good strategy, there are times when shooting all three will be better, as you will be able to destroy pegs more quickly and score multiple points.

Some of the game’s stages require you to obtain a set score as well lighting up all five buckets. In these stages it’s always best to aim for the score objective as all pears will eventually end up on the bucket. If they don’t, aim directly for the buckets once the score objective has been cleared.

When trying to light the buckets, it’s always best to do the corner ones first. The other ones are way easier to light. During some stages the buckets will be covered by lids and other objects. Bounce the pear off them multiple times to remove them completely.

Papa Pear Saga has a lot of special pegs that will bestow on you many different advantages. Knowing what they do it the best way to make the best use out of them.

Papa Fire Peg – Makes your pear turn into a fireball, allowing you to destroy more fruits than usual

Light Up Peg – Lights up a bucket

Special Pegs can be obtained in some different ways. Some gamers will find it easier to just buy them but there are other ways to get them without spending money.

To get a Papa Grande peg, you must destroy fifty objects. To get the Multiplier Peg, you will have to destroy all fruits of the same variety. To get the Fire Pape you have to make your peg bounce off a bucket’s edge and then off the wall. Finally, the Light Up Booster is obtained by hitting a lightened bucket seven times.

Papa Pear Saga is now available for download on the App Store.