Home Mobile Gaming News Pandemic: The Board Game Coming to iPad In October 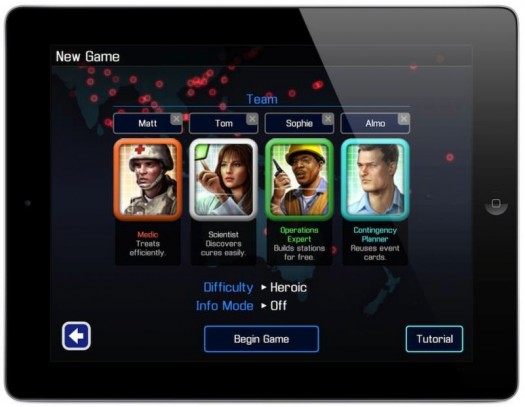 Developer Z-Man Games has made it official: their infectiously popular game Pandemic: The Board Game will be making the leap from the tabletop to the digital realm next month.

A digital iPad version of Pandemic is officially slated for an October 3rd release according to Z-Man’s website and it will feature a few spiffy upgrades not seen in the original board game. In the board game version of Pandemic, up to four players can step into one of five different roles such as medic, scientist, or operations expert as they work to find cures for four different diseases that have broken out before the world’s population is wiped out.

The iPad version meanwhile will increase the number of available roles to seven, include three different difficulty levels (beginner, intermediate, and expert), and be playable in either single-player or with up to three other players through a pass-and-play mode. A brand new interface that displays viral hotspots and real-time player progress updates combined with all-new video tutorials will help both Pandemic newcomers and veterans alike ease into the new digital format.

The iPad version of Pandemic: The Board Game will be available through the iTunes App Store on October 3rd. No word yet on how much it will cost but, for more info, you can check out the full announcement over at Z-Man Games’ website.