It is time to paint the whole world! Painty Mob is a fast-paced game about splashing color all over the world – including its unsuspecting people! But, just as a real person would act, these townsfolk are not too happy about getting color all over them, so you will need to stay ahead of them while painting the rest of the town.

In Touch Tap Play’s Painty Mob tips and tricks guide, we will go over the basics of splashing paint everywhere and progressing from level to level. While Painty Mob seems like a simple and easy to play game, there is some nuance to it that can help you play better, so let’s get started with our Painty Mob cheats, tips, and tricks strategy guide to paint the whole town!

The main objective of Painty Mob is to paint all the citizens of the world. You can move around and tap the right side of the screen to let off an explosion of paint, dousing everything around you in color.

As you paint people, the progress bar at the top of the screen fills up. When you fill the meter up all the way, you will move onto to the next level.

When a person is covered in paint and becomes a part of your painty mob, they will become angry and start chasing you around with a black exclamation mark over their head. Do not let them catch up to you otherwise it is game over!

When you tap the right side of the screen, your character will let out a big paint explosion, covering everything nearby in paint. This powerful explosion can only happen when the cloud above you is flashing white.

Your paint regenerates on its own over time, but it is a slow regeneration. It is best to use your paint explosions in controlled bursts so that you do not empty yourself out completely. When you see paint being absorbed into the cloud above you, that means regeneration has kicked in.

You never want to run completely out of paint, as you never know when you will need to release an emergency paint explosion to keep an angry mob off of you. Remember that all it takes is one angry mob member to take you down!

To immediately regenerate a good chunk of your paint power, look around for food. Eating food gives you paint back, and you can find them marked by a paint droplet. Always stay on the move looking for more food!

Get Lots of Points with Combos

When you cover multiple people with paint, you will start a combo. When you have a combo going, you will earn bonus points depending on how long your combos has been. When you have an active combo around 20 or so, you will get way more points per person painted!

In order to get the most out of combos, you need to make sure that you are moving around the level as fast as possible. It is hard to maintain a combo while staying in the same space, so keep moving around looking for groups of new targets.

When you start a combo, you only have about two seconds before it breaks. You have to paint a new target within that time to refresh the timer.

Combos are the key to getting high scores, and high scores are important in this game because they are not just for bragging rights – they help you unlock new items to use that will make your painting journey much easier!

Watch out for Hazards

Not only do you have to watch out for angry mobs, but you also have to be careful of environmental hazards like bombs and the like.

Bombs will spawn randomly around the level, and they will ignite when you splash paint on them. After a few seconds, bombs will explode and they can hurt you if you are too close to them!

You can use them against mobs, though. Try to be on the opposite side of where you want the bombs to go, then use your paint explosion to knock them into mobs. You will get bonus points if you can damage a lot of mobs using bombs!

Bombs are just the first kind of hazards that you will come across in the game. In the later levels, you may also encounter new kinds of hazards so be careful!

Using Items to Help You Out

Every time your game is over, your points be tallied up into a meter. The more points you get, the more the meter will fill up. When it is filled, you will unlock a new type of item!

Items are consumable power ups that upgrade your abilities in some way. For example, the first item you get is the Jellyfish which orbits around your character. The Jellyfish will sting any mob that it touches, paralyzing them for a short time.

Before they can be used, items must be bought using coins. They do not cost that much, so we recommend always taking an item with you when you start the game. Also, items come in packs of ten and you only expend one when you start, so they are always worth it!

In addition to that, every time you play with an item it gains its own experience. Items can level up, and when they do their abilities are upgraded in some fashion. The Jellyfish will shock enemies for longer when it is leveled up, so it is always worth it to bring an item with you.

As you play through the game and fill up the points bar, you will unlock new items for you to utilize. In addition to that, you will also unlock fun new character skins to enjoy!

You can get new characters and skins from other games, so you might see some familiar faces if you have played other indie games. Some characters you will unlock once you get enough points, but others must be bought with coins.

Some of these characters can be really expensive, so make sure that if you are going to buy new characters, save some coins to buy items in case you run out.

That’s all for Painty Mob! If you have any other tips or tricks to share, let us know in the comments below! 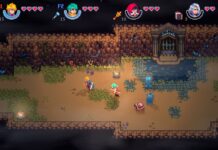