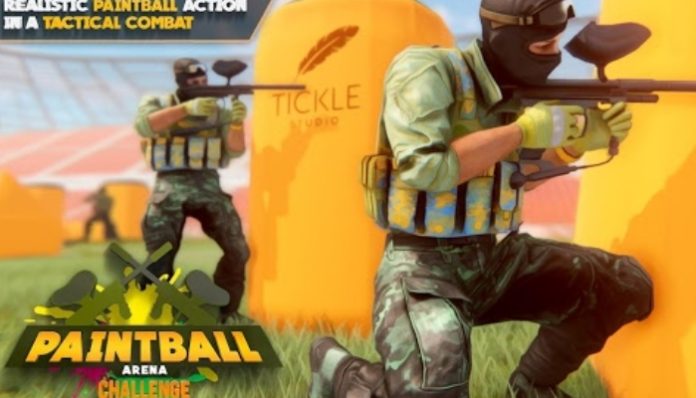 Sneak up on your opponents!

Your computer controlled opponents tend to have some wacky behavior patterns, but they’re almost susceptible to getting jumped on. We’ve noticed that if you’re far away, opponents will not come after you.

Instead, they’ll just patrol one route or even better stand completely still. This makes them easy pickings! Just keep your distance, use your scope, and pick them off one by one!

However, sometimes they’ll learn of your antics and start moving towards you. If you want to get closer for a better shot, it’s best to move between cover. Don’t stand out in the open for too long, as these AI opponents have some pretty sharp accuracy!

Be sure to jump over low walls and sprint to minimize time out of cover. If you’re out in the open with multiple opponents nearby, you’ll get messed up pretty quick!

Stay behind and snipe!

There’s nothing wrong with staying by your spawn point and sniping your enemies. Your paintball gun doesn’t seem to have limited range, as we were able to hit opponents all the way across the field.

However, keep in mind that’s true for your opponents as well, which means if they know where you are they can hit you at any time, which is why you should stay behind cover often!

But that’s exactly why this strategy works so well. Once you’ve taken out a couple guys, they’ll start to advance on your position. As long as you remain by cover, you can take them out as they run straight at you in the open.

Go on the offensive!

Or, if you’re more of the fiery type, you can take the fight to them up close and personal. You don’t have to use your scope and you take out enemies in the blink of an eye with close-range shots.

Obviously, this is the far more dangerous tactic as you’re more exposed and vulnerable to counterattack, but enemies will go down much faster than waiting for them to come to you.

Occasionally, the AI will get crafty and try to use your own tactics against you! If you’re dealing with a group of enemies in one direction, be sure to check your flanks every now and then. Sometimes a rogue enemy will go the opposite direction and try to sneak up on you from around a corner. It’s best to put away your scope every now and then and check your surrounding, lest you get an unpleasant surprise!

That’s all for Paintball Arena Challenge. If you’ve got any other tips or tricks to share, let us know in the comments below!