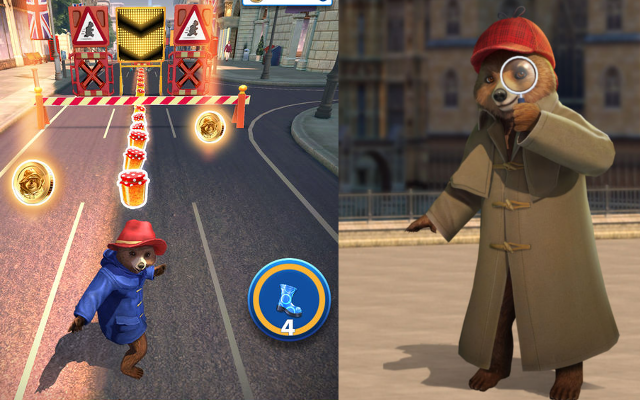 Paddington’s got a new movie coming soon, so what better way to celebrate than running through the streets of London? Paddington Run is an endless runner based on the lovable Paddington Bear.

Throughout your runs, you’ll be able to collect snazzy outfits for Paddington, use lots of different fun toys and boots, and of course collect a ton of marmalade. With the help of our Paddington Run cheats and tips, you’ll be a Paddington Pro!

Paddington is waiting, so let’s get right to it with our Paddington Run cheats, tips and tricks strategy guide!

Dress for the area!

Paddington’s different outfits aren’t just to make him look snazzy – they actually provide him with really nifty bonuses! Take his regular outfit “Classic Paddington” for example, as it makes all boot power ups in Central London last longer than usual. Before you jump into a run, the game will let you know what the recommended outfit is for that level. You’re free to use any outfit you wish ultimately, but you might perform better with the recommended one!

Save gems for suitcases!

Paddington is quite the fashionable bear, but before you can use his other outfits you’ll need to unlock them with either marmalade or outfit cards, which can be found in the suitcases. Silver Suitcases costs marmalade and you can find uncommon cards in them, while Golden Suitcases costs gems – the premium currency of the game – and they have a chance to net you rare cards.

Try not to spend your gems on revives and the like, as you’ll need them for as many Golden Suitcases as you can get. You can also buy the Silver Suitcases, but make sure you set aside some marmalade for upgrades. Speaking of which…

Marmalade can be spent in the shop to upgrade all of your toys, boots, and of course outfits. Upgrading outfits will boost the effect of the outfit, while upgrading toys and boots will increase their duration. Be sure to upgrade your favorite power ups and outfits before venturing out into London!

Keep an eye out for tokens!

During runs you may occasionally come across a golden token. These tokens can be spent on the prize wheel where you can spin the wheel for a random prize. Tokens are somewhat rare, so if you see one make sure you do everything you can do grab it. Some of them even require the use of boots or a toy, so be on the lookout for those.

Watch out for the decoy items!

This game has a nasty habit of placing power ups and random prizes in nefarious places, like right in front of an obstacle that’s being obscured by the item in question. We dubbed these “decoy items” as going for them almost certainly guarantees your doom!

Some of these setups are easy to spot, like an item on the far end in front of two obstacles, but some are harder to see. If you see an item that’s just looking a little too sketchy, then it’s usually better to just ignore it and keep running.

That’s all for Paddington Run! If you have any other tips or tricks to share, let us know in the comments below!