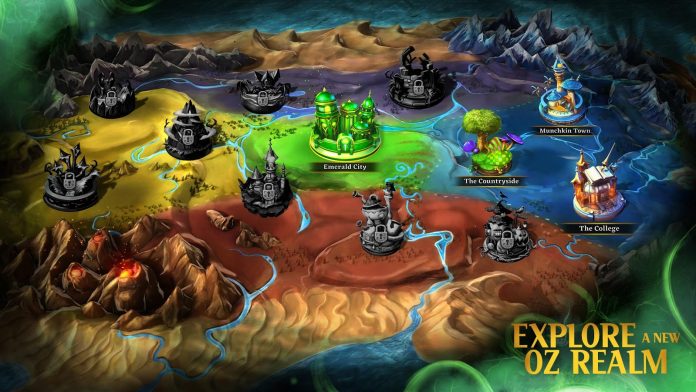 It’s the Wizard of Oz like you’ve never seen it before! Oz: Broken Kingdom takes us back into a re-imagined world of Oz. Join an all new hero, Ophelia Shen, on an epic quest to save the kindgom! Of course, she won’t be alone. Accompanying her are legendary Oz heroes Scarecrow, Tin Man, and Lion. Broken Kingdom plays much like a turn-based RPG, but there are some card collecting elements as well. Today we’re diving into the the wonderful world of Oz, so here’s our Oz: Broken Kingdom cheats, tips and tricks strategy guide!

Each hero has a specific resource that can significantly power up their abilities.

2. Make the better gems as soon as possible!

You will gain access to the city’s gem crafters once you defeat the final boss of Munchkin Town. You’re probably struggling through the tougher fights at this point in the game, so it’s imperative that you start making the better gems as soon as possible. You’ll need every ounce of help you can get even if the stat boosts don’t seem like much at first. Keep in mind that as you craft the better gems, you can use them to craft the even greater gems! You need to remove them from your heroes first, though.

3. Something not working? Try other heroes!

Generally you’re going to pick the hero that has the type advantage over the enemies you face, but usually levels will have enemies from at least three different types. If you’re having trouble with one hero, try out another one and see what works. Early on, we had a lot of trouble when using Tin Man, as his damage output was just not enough to get through some levels, even with all of his defensive abilities. Ophelia was fast and strong enough to clean up even when against Strength-type enemies.

I’ll be honest. I had a pretty rough time getting through Munchkin Town, which is just the starting chapter. The difficulty curve of this game ramps up pretty fast, and you’ll be losing battles frequently if you don’t upgrade often.

That’s all for Oz: Broken Kingdom. If you have any other tips or trick to share, let us know in the comments below!