After a cataclysmic earthquake, the United States of America is left in ruins. Subterranean creatures have invaded the surface world, and they are relentless killers. You start your journey on the east coast, with hopes of rescue on the west coast. Will you make it across the states alive?

Overland is a tactical turn-based strategy game where you must make complicated decisions and balance your resources, all the while trying to outrun the monsters who are hunting you. In our Overland tips and tricks guide, we will go over all the different ways to be prepared and how to face your challenges, which should help you survive. Here is our Overland cheats, tips and tricks strategy guide to surviving the wasteland!

In Overland, every character has two action points, or AP. Moving one spot requires 1 action point, and performing certain actions like turning on a car or equipping an item also requires an action point. If you are not sure if an action will require a point, take a look at the button – if it is white, it is a free action, but if it is red it costs an action point.

Keep an eye on your action points at all time and do not put yourself in dangerous situations, like running right up to a monster with no action points. Thankfully, if you make a bad move, you can always hit the undo button to go back one action point.

Be warned that some actions cannot be reversed! If you see a yellow exclamation mark next to the undo button, that means that your next action is irreversible, so act wisely!

If a character takes damage, they will lose an action point, indicated by an orange box. Until that character is healed up, they will only be able to perform a single action every turn, which can be a death sentence if left unchecked.

Get in, get out – that’s the rule to survival!

In Overland, you will travel across the United States of the America, starting on the east coast with your final destination being the west coast. There are five regions that you must travel through before you get to the west coast, and each region can have anywhere up to 10 area, so you must be prepared.

As a general rule, you do not want to stay too long in one area. The basics to survival is to get in, get what you came for, and get out as fast as you can. The longer you stay around, the more danger you will put yourself and your group in.

When you roll up into a new area, always take the time to scope out the environment and check for gas, items, and where all of monsters are. Plan your route of attack, and try to factor in as many possible outcomes – it will help you come up with back up plans.

Keep track of your noise!

When a turn passes, all humans and animals in the area will pulse, signifying that they are making passive noise. What this does is attract monsters to their location, which means that as soon as you enter an area the monsters are already heading to your location.

If you have multiple group members, you can split the attention by having them positioned in different areas. Managing your noise like this is one of the most important aspects to survival, as clever and smart use of tactics like this will greatly improve your odds of getting out unscathed.

Fight only if absolutely necessary!

If you find something that can be used like a weapon, whether it is a flimsy stick or an iron pipe, you can attack monsters. Most monsters will go down in one hit, but some require two hits – namely the monsters with the two blue arms.

However, it is important to keep in mind that any aggressive action you perform generates loud noises, and also whenever the monsters die they will emit a high-pitched shriek. Loud noises will generate more monsters to burrow into your area, indicated by raised patched of dirt on the ground.

After a few turns, new monsters will emerge from the ground. There is no limit to the amount of enemies that show up, so if you fight recklessly you can get overwhelmed very easily. Fight monsters only if it absolutely necessary, like if a character is in danger of dying.

Find yourself an aggressive pooch!

If you go to an area marked with survivors, you may find other people to join you on your journey. Every person comes with personality traits that let them perform exclusive actions. With limited space in your car, you will need to choose your companions wisely.

However, there is a small chance that you may come across a dog instead of a person. Dogs will always join you if you request them to, and just like people they come with their own traits.

One trait that you should look out for is the “aggressive” trait. If a dog has this, they can attack monsters at will. Dogs cannot use items normally and can only carry them around, so having a dog is like having a weapon that never breaks (as long as you take care of the pooch, of course).

Again, fighting is still discouraged, but an aggressive dog’s ability to bite back can be a life saver in sticky situations. If you happen to come across an aggressive dog, rescue them immediately!

Always keep an eye out for gas!

Red gas cans are the main thing to look out for whenever you enter a new area. Gas cans can hold up to five liters of gasoline, but you must bring the can back to your car in order to refill it.

You can find gas cans strewn about even if you are not at gas stations. You can also search the area for functioning cars and siphon gas from them if there is any left over, or you can also just take the new car if it is in better condition.

Gas is the most important resource to have as it gives you more options to choose from when you are selecting an area to go to. If you run out of gas or you are low, the game forces you to head into a nearby gas station which is almost always swarming with monsters, essentially making it a game over.

Grab the wooden boards to use as shields!

You may come across wooden boards lying around here and there. You cannot use them to construct any buildings or anything, but you CAN use them as defensive options. When a character (not a dog) has them in their inventory, they can block attacks.

Wooden boards can take two hits before they are destroyed, making them invaluable to have when you are forced to traverse through monster-ridden areas. Try to have at least one wooden board on one of your characters – you never know when you will need the extra defense.

Hang onto flares and flashlights!

Flares are consumable items that can help light up a dark area. You will eventually have to explore areas at night, and the conditions as you can expect are not in your favor. Monsters can still track you but you will have no idea where they are.

When you light a flare, your character will hold it and be able to see a short distance around them. It is not much, but it is better than complete darkness! If your character picks up something, they will put down the flare on the ground. Do note that the flare is a hot object, meaning it can start fires if left around flammable objects.

The second item is the flashlight. This illuminates the area around you much more than the flare does, and you can equip it as an item to have permanent source of light.

Every action has consequences!

Remember that every thing you do, no matter inconsequential it seems, will have potential repercussions later on. For example, if you abandon a group member to fend for themselves, they may come back later on to enact revenge upon you, probably at a really bad moment.

Of course, it is impossible to always act with the best intentions in mind, as more often than not you will be forced into hard decisions. Just make sure that you think each decision through thoroughly!

That’s all for our guide on Overland. If you have any other survival tips to share, let us know in the comments below! 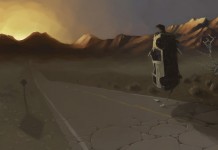 Strategy Game Overland Launching This Summer On The App Store